A DUET OF HUMAN AND ROBOT 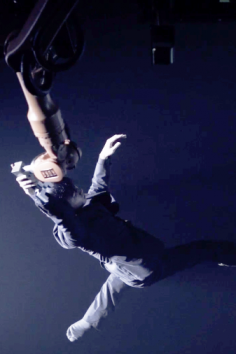 HUANG YI & KUKA
A live theatrical performance and 3D film\
Production of HUANG YI & KUKA has begun development at 3LD Art + Technology Center in association with Sozo Artists and commissioned by Quanta Arts Foundation. HUANG YI & KUKA features a performance between live dancers and KUKA, a robot conceptualized and programmed by Huang. Of this work Huang states, “Dancing face to face with a robot is like looking at my own face in a mirror…I think I have found the key to spin human emotions into robots.”

About Huang Yi
Huang’s pioneering work is steeped in his fascination with the partnership between humans and robots. He interweaves continuous movement with mechanical and multimedia elements to create a form of dance which corresponds with the flow of data, effectively make the performer a dancing instrument. Named by Dance Magazine as one of the “25 to Watch,” Huang was immersed in the arts at a young age, spending much of his childhood in his parents’ studio watching them teach tango and learning to paint alongside his father. He is widely considered one of Asia’s most prolific choreographers. ­­

3-Legged Dog exists to produce new, original works in theater, performance, media and hybrid forms. Working out of a strong literary tradition, 3LD’s mission is to explore the new narrative possibilities created by digital technology, and to provide an environment for artists to create new tools and modes of expression so that they can excel across a range of disciplines.
.
.
.
.
.
.
.
source: qaringtw

Similar to children in the west who imagined having androids, or earlier of R2-D2s or C-3POs, Huang Yi had envisioned a best friend of the blue Japanese manga robot cat, Doraemon. Huang Yi & KUKA fulfilled the first of a long-pursued curiosity for the partnership of human and robots.

Huang Yi, a dancer/choreographer, had created dance works merging technology and machinery with rich imageries, including a self-invented motion-sensitive auto-play computerized violin in Symphony Project I-Violin (2010). This was created to explore the possibility of duet with dance and technology. In Huang Yi & KUKA, the idea settled on finding the most compatible robotic dance partner.

A two-time winner of Taipei Digital Art Performance Award, Huang Yi is known for his performance experiments as well as his velocity and precision in dance. His pure movement choreographies had New York Times lauding as “a spinning machine of a dance with near- continual motion.” Huang creates works as if data was flowing through his limbs and mind, and he is the programmer of the body. While the world looked at robots as tools, Huang Yi looked at himself and realized he is a tool for dance. He reflected on how to realize humanity through new concepts and new technologies. After relentless pursuit of Taiwan KUKA Company for literally lending an arm to his creative vision, Huang finally embarked on a dance journey with the KUKA, the robotic arm.

“Dancing face to face with a KUKA robot is like looking at my face in a mirror. I make KUKA mimic my movements, and I learn from him, I make myself dance like a machine.”

Huang Yi’s reimagining dance partnerships with technology had pivoted the audience’s perception of industrial/performing arts, and gone with both the dancer and KUKA as they journey in this poetic dance duet.
.
.
.
.
.
.
.
source: taishinartorgtw

HUANG Yi & KUKA is the fulfillment of a childhood dream for rising young choreographer HUANG Yi, who always longed for a companion like the robot cat Doraemon. Instead, he found himself a robot to dance with. He discovered that because of the accuracy and precise of its movements, the robot could closely follow his commands, and when he danced, he would imagine his body creating sounds or data that would interact, or even change his surroundings.

According to HUANG Yi: “Robots are a tool, and I myself can be a tool for a company or for a group. Dancing face to face with a KUKA robot is like looking at my own face in a mirror. I make KUKA mimic my movements, and I learn from him, I make myself dance like a machine. After the debut, many audience members told me that they think that KUKA moves like a living person, and the chemistry between us during the dance touched them. I think I have found the key to spin human emotions into robots.”

Perhaps the first work in Asia to feature human dancers with robots, the work also marks a successful partnership between a Taiwanese artist and internationally renowned technology firms, resulting in a series of technical challenges and breakthroughs that truly surpass the international standards of technical performance.

Huang Yi Studio
Emerging choreographer HUANG Yi is an “enfant terrible,” in the words of LIN Hwai-Min. Aside from dance, his artistic practice includes video, photography, and installation art. In 2010, he took second place at the Cross Connection Ballet 3rd Copenhagen International Choreography Competition in Denmark. He won the Digital Art Performance Award with “Symphony Project I Violin” at Digital Art Festival Taipei. That year, “Spin 2010” was also named one of the top ten performing arts productions by the Taishin Arts Award.

Jury’s comments
HUANG Yi & KUKA is an astonishing endeavor that starts from actions and cleverly combines the movements of humans and machines into an emotional dance that is seemingly avant-garde but actually classical. From researching industrial KUKA machinery, HUANG Yi conceived and created the possible dance moves between himself and KUKA. He then wrote a computer program, and after countless rehearsals with KUKA, Huang was able to dance with KUKA on the stage he designed himself. The music and sounds in the performance, be it the familiar Arvo Part melodies, classical Bach scores performed by the violinist Heifetz or even the mechanical sounds KUKA makes when moving, are all tightly integrated with the movements. Two mobile lights shine on the performers from above, creating a warm atmosphere and seemingly lead the audience through a performance that points to new artistic trends in the future. Committee member:LIN Ya-Tin

HUANG Yi has been in the spotlight of the dance community in recent years and is the resident choreographer of Cloud Gate II, a Taiwanese dance group. HUANG is usually a shy and low-key person, but when it comes to computer programs and mechanics, his eyes and emotions are set on fire as if he were possessed with another spirit. Recently, he combined his two passions and claimed a national award by picking a robot as his dance partner.

KUKA, an industrial robotic arm from Germany, is on stage, gyrating with Johann Sebastian Bach’s violin solo played by Jascha Heifetz. With a fast tempo, lights glimmer on KUKA’s arm, and movements of the machine’s joints form a visual contrast with HUANG’s cool physical movements. In the dance HUANG Yi & KUKA, the robot KUKA acts as if it were stirring back to life, which makes the audience hold their breath and watch, experiencing the unprecedented “coordination of dancing.”

“Technology has special meaning to me,” said HUANG Yi. At the age of 15, HUANG’s family was faced with a drastic financial crisis. They moved from a five-story villa to a 13-square-meter room. Even though they were in a very difficult situation, HUANG’s parents still put up some money to buy him a 386 computer. They chose to take three jobs at the same time rather than give up on their children’s education. From the day HUANG got his computer, he decided to fix and upgrade it on his own. While his classmates were playing computer games, HUANG’s computer was already filled with website and Flash design programs. Since high school, HUANG has been earning money for upgrading his computer by designing websites. “For me, technology and computers are not only tools, but my friends accompanying me growing up.”

Dancing with robots has been a dream for HUANG since his childhood, and there is no doubt that HUANG Yi & KUKA fulfills his dream. HUANG always wanted to have a robot like Doraemon, the cartoon character; therefore, he got an industrial robot to be his dancing partner. While KUKA is moving, it has the accuracy needed for HUANGs demanding choreography. HUANG says he imagines his body is making sounds and producing data while dancing, and his body can even affect the environment, which is thus the inspiration for many of his works.

Before HUANG Yi could dance with KUKA, he had to take courses and be trained. Only when he passed the test could he start operating the robot. Due to Taiwan’s safety regulation stating “people can’t get into a robot’s range of movements while it is rolling,” HUANG must perform his dancing swiftly and precisely without violating the regulation. He uses a flashlight to create an illusion of having indirect contact with the robot, and through dislocation, the dancer and the robot appear close to each other. The ingenious lighting interaction catches the audience’s attention, giving them a sense of beauty as they watch man and robot dance in unison.

HUANG Yi & KUKA won the prestigious Grand Prize of the Taipei Digital Art Festival in 2012. HUANG says this artwork may be the first dance performed by a human and an industrial robot in Asia, and it is a successful example of a Taiwanese artist working with a top international technology company as well. HUANG will bring this performance to as many audiences as possible in the future and continue to move forward with his art.