at least one person killed 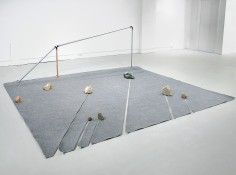 Work from his oeuvre.

“Ian Pedigo continues to make sculptures imbued with artifactual significance. This is revealed through a process of peeling layers, creating visually formal relationships and conceptual congruence. The works begin with found images and objects that are added upon, altered, and edited in a process that echoes ritualistic practices. The results are forms woven from threads of banal occurrences and everyday life; evidence lying dormant in the dross surrounding us.” – Klaus Von Nichtssagend Gallery.
.
.
.
.
.
.
.
source: artsynet

Ian Pedigo is a sculptor and installation artist who creates assemblages from found objects, with particular sensitivity to texture, form, and the histories of his materials. Though he originally made pieces using exclusively construction materials, Pedigo has broadened his practice to include varieties of commonplace material both manmade and natural. He thinks of his own practice as an act of transformation, presenting objects in ways that are not immediately intuitive though still recognizable. For each exhibition, Pedigo conceives of and develops a suite of discrete pieces simultaneously such that they all relate to one another in the gallery space. There is also a performative quality to Pedigo’s creative process, which can involve extensive experimenting. Though he does make some of his work in studio, the artist often works spontaneously on site, responding to the work’s environment.