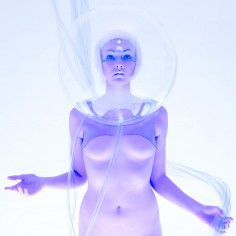 I’m excited to tell you about a series of experimental performances I’ll be producing with Ed Dahl and Ian Albert in the second week of December. Deva: Alpha will be unlike anything we’ve ever done, and possibly unlike anything you’ve ever seen. It will be a meeting of performance art, dance, fashion, and improvisational music, evolving across five mind-bending performances over three days. Each show will be different from the others, with five distinct musical groups ranging from an electronic duo to a choral group to a modern gamelan ensemble. So come for the music, stay for the incredible costumes and performances, and then come back the next day to see a whole new show! Tickets are limited to 25 per performance, so get a jump on the crowds and buy yours today!
Note: there will be nudity, so you may not want to bring your little ones to this one.

Thanks and hope to see you all there!

Calling the San Francisco based Ilanio a fashion designer doesn’t seem to be quite … enough. From his “fash mob” approach to bringing runway shows out onto the streets to the never conventional, predictable or at times even decipherable garments he’s created over the years — the lipstick mace pregnancy swimsuit of the “Too hot the eye of heaven” collection, for example — there’s always been an element of performance to his collections. This weekend he’s taking the leap into full-blown performance art as the designer presents “Deva: Alpha” a multi-art event including dance, music, improvisation and most significantly, fashion.

“It all started from the costumes,” the designer says between rehearsals. “When we were doing this project initially as a film, I asked myself what a hypothetical universe’s fashion would look like if they didn’t have all the baggage of what came before it on earth? I thought about clothing from the point of view of just making it for pure function but again, maybe not functions we’re aware of in our present society.”

Trust me, it’s a very Ilanio concept and the preliminary glimpses this writer has seen of his futuristic, at times barely there and slightly medical (rubber anesthesia hosing featured in one early piece) costumes, it will all make sense upon their grand unveiling at the show.

There will be five performances running Friday through Sunday at Ilanio’s loft in Potrero Hill with the catch that, since this is a show based heavily on improvisation each performance will tell a different story through clothes.
The performance themes on the different evenings include: The changing of the guard and indigo children, virtual existence and sexuality, drone combat, the wheel of life and Unity/Duality Masculinity/Femininity. Each performance will also feature a different musical group accompanying, ranging from an electronic duo to a choral group to a modern gamelan ensemble. The Go-Go’s Jane Wiedlin will be the closing accompaniment on Sunday.

In addition to the futuristic costumes created especially for “Deva: Alpha” a specially raised and under-lit plastic stage has been erected in the loft that, as the performance begins, will gradually raise the temperature of the space (as stage lights often do).

“We decided to make that part of the performance,” Ilanio says. “It definitely allowed us to explore that element of heat in the costumes. You’ll see how we use it.”
.
.
.
.
.
.
.
source: ilanio

Deva: Alpha was a series of five live performances blending dance, performance art, music, and concept fashion. The goal of the project was to explore a hypothetical fashion language, one unencumbered by the historical functions and cultural signifiers of fashion as we know it. The peformances were highly improvisational, with a distinct theme for each one, along with distinct live musicians and choreography. Deva: Alpha took place over three days, and was performed in San Francisco.
.
.
.
.
.
.
.
source: ilanio

The goal of my current work is to design, construct, present, and publish a series of visually stunning fashion concepts that explicitly disregard wearability, saleability, and practicality; that embrace advanced definitions of sexuality and gender; and that defy the commercially-mandated boundary between fashion and art world.
Presentation will consist of ongoing performances in innovative and unusual spaces, and will combine live music, original video art, dance, and performance art with a more traditional runway format. Separately, photo editorials will be submitted to concept fashion magazines.

Some of the designs themselves may soon become available on a limited-edition basis.