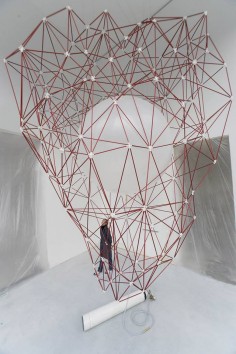 Iñigo Manglano-Ovalle was born in 1961, in Madrid, Spain, and currently lives and works in Chicago, Illinois. He received B.A. degrees in Art and Art History as well as Latin American and Spanish literature from Williams College in Williamstown, Massachusetts in 1983. In 1989, he completed his M.F.A. degree in sculpture from The School of The Art Institute of Chicago. Manglano-Ovalle investigates diverse subjects such as technology; climate; immigration; and the global impact of social, political, environmental, and scientific systems. Often working in partnership or employing technical experts across multiple disciplines (including engineering, architecture, genomics, and climatology), Manglano-Ovalle produces objects that are often technically complex, formally captivating, and conceptually engaging. His early work focused on collaborative explorations with young people in his hometown of Chicago, which led to the founding in 1993 of Street-Level Youth Media, a community arts organization for youth. Across multiple independent projects executed during the same period, Manglano-Ovalle explored a multifaceted and socially focused approach to art making, blending layered concepts with a variety of materials both typical and unorthodox. Incorporating objects such as identification cards in Assigned Identities (1991) or automobile tires in Flotilla (1991), Manglano-Ovalle made reference to the difficulties surrounding illegal immigration into the United States. In the sculptural works Bloom (1995–96) and Subwoofer (1995), Manglano-Ovalle utilized ballistic gelatin, firearms, and car sound systems to explore notions of violence and division. His noted film trilogy Le Baiser/The Kiss (1999), Climate (2000), and In Ordinary Time (2001) focused on the architecture of Mies van der Rohe and the implications of Modernism. More recently, he has employed genomic and meteorological methodologies to explore issues of race, identity, and the promise and threat of technology in works such as Cloud Prototype No. 1 (2003) and Portrait of a Young Reader (2006).

He has received the Richard H. Driehaus Foundation Individual Artist Award (2008), the John D. and Catherine T. MacArthur Foundation fellowship (2001), the Media Arts Award from the Wexner Center for the Arts (1997), and a National Endowment for the Arts fellowship (1995).

Iñigo Manglano-Ovalle was born in Madrid, Spain, in 1961, and was raised in Bogotá, Colombia, and Chicago, Illinois. He earned a BA in art and art history, and a BA in Latin American and Spanish literature, from Williams College (1983), and an MFA from the School of the Art Institute of Chicago (1989). Manglano-Ovalle’s technologically sophisticated sculptures and video installations use natural forms such as clouds, icebergs, and DNA as metaphors for understanding social issues such as immigration, gun violence, and human cloning. In collaboration with astrophysicists, meteorologists, and medical ethicists, Manglano-Ovalle harnesses extraterrestrial radio signals, weather patterns, and biological code, transforming pure data into digital video projections and sculptures realized through computer rendering. His strategy of representing nature through information leads to an investigation of the underlying forces that shape the planet, as well as points of human interaction and interference with the environment. Manglano-Ovalle’s work is attentive to points of intersection between local and global communities, emphasizing the intricate nature of ecosystems. He has received many awards, including a John D. and Catherine T. MacArthur Foundation Award (2001) and a Media Arts Award from the Wexner Center for the Arts, Columbus, Ohio (1997–2001), as well as a fellowship from the National Endowment for the Arts (1995). He has had major exhibitions at the Rochester Art Center, Minnesota (2006); the Art Institute of Chicago (2005); Museo de Arte Contemporáneo de Monterrey, Mexico (2003); Cleveland Center for Contemporary Art (2002); and Museum of Contemporary Art, Chicago (1997). Manglano-Ovalle lives and works in Chicago, Illinois.