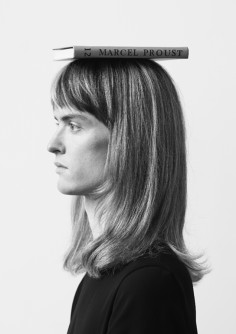 source: storerenaissancesocietyorg
A 13-volume set of Marcel Proust’s collected works was published in Yugoslavia in 1967. This edition, in the Latin alphabet, was highly valued by Yugoslav intelligentsia for its elegant translation from French by the poet Tin Ujević.

During the Bosnian civil war, these Proust sets fetched up to the equivalent of a full year’s salary in the Belgrade black markets. They were frequently looted together with other valuables from Bosnian homes. The set exhibited in Irena Haiduk’s Seductive Exacting Realism was seized by local police from Belgrade Kalenić Market in 1995. It was acquired at a public auction in 2014. It is missing volume number 12.

This book is published in conjunction with Irena Haiduk, Seductive Exacting Realism, a two-part project that was presented as parallel exhibitions at the Renaissance Society and the 14th Istanbul Biennial in autumn 2015. It features contributions by Ivo Andrić, Hannah Feldman, Irena Haiduk, Monika Szewczyk, Marina Vishmidt, and Solveig Øvstebø.
.
.
.
.
.
.
.
source: artnorthwesternedu
Irena Haiduk is the founder of Yugoexport, an oral corporation whose primary goal is to demonstrate how to surround ourselves with things in the right way. Her works have been heard or seen at the Kadist Art Foundation in Paris, The Renaissance Society at the University of Chicago, and the 14th Istanbul Biennial.

Spells, a comprehensive collection of her writings edited by Karsten Lund and introduced by Matthew Jesse Jackson, was published by Sternberg Press in 2015. A monograph on Seductive Exacting Realism (2015) is being co-published by Sternberg Press and The Renaissance Society with contributions by Hannah Feldman, Solveig Øvstebø, Monika Szewczyk and Marina Vishmidt.
.
.
.
.
.
.
.
source: artadiaorg
Irena Haiduk’s multi-faceted works reach beyond their anchors in Balkan history to mingle with other corrosive forces and slice away at the well-fed bodies of power. She has exhibited at the Institute for Contemporary Art, Philadelphia; the Museum of Contemporary Art Chicago; Museum of Arts and Design, New York; Reva and David Logan Center for the Arts at University of Chicago; AKUD, Berlin; the 4th Athens Biennale; and other locations. A monograph of her writing, SPELLS, has just been published Sternberg Press. Haiduk teaches at Northwestern University.