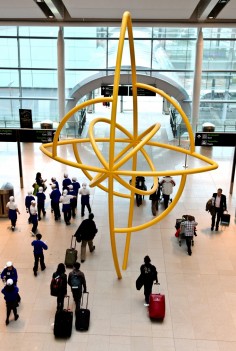 The startling objects of Isabel Nolan’s art take wildly unpredictable forms, — but they are at the same time the fully consistent outcomes of a singular, searching artistic sensibility. Nolan’s works evolve out of almost scholarly processes of investigation — intensive enquiries into cosmological and botanical phenomena, perhaps, or analytical scrutiny of literary and historical texts. These contrasting means of representing reality (and of comprehending its infinitely various components) provide divergent points of departure for Nolan as she attempts to somehow account for the enduring strangeness of the world, even in its most intimately familiar forms.

Recent large-scale sculptures in particular have demonstrated an extraordinary capacity to realize in elaborate form the uncertainties of the questing, subjective consciousness. Such works often have the appearance of grand metallic doodles – line drawings that might imply efforts towards rational modeling or more impulsive sketching, but that are rendered dramatically, imposingly real. These sculptures (such as Slow Dirty Solution, 2013) have an inhuman heaviness and scale, and yet their precariousness — their barely held-together state — might well speak of states of mind as much as material tensions.

Regularly complementing such sculptural endeavours in Nolan’s art are wall-hangings, paintings and works on paper that carefully ‘domesticate’ the elaborate strangeness of the sculptures, but that also have their own beautifully inscrutable integrity. In these series, as we find throughout Nolan’s work, images, shapes and atmospheres point to aspects of the world as it has been previously represented in art or science — or as it has been experienced privately. They point outwards towards empirical reality, while also presenting that external world as inexorably enigmatic.

Nolan’s recent solo shows include the Musée d’art moderne de Saint Etienne, France (2012), the Return Gallery, Goethe Institute, Dublin (2012/03), the Model, Sligo (2011) and Kerlin Gallery, Dublin (2007/09). Other solo shows include, Project Arts Centre (2005), Gallery 2, Douglas Hyde Gallery, (2008), all in Dublin, and in the Studio, as part of Glasgow International 2006 and in Artspace, New Zealand in 2008. She represented Ireland at the 2005 Venice Biennale in a group exhibition, ‘Ireland at Venice 2005’. She has participated in numerous group exhibitions including ‘How Things Turn Out’ (2002) and ‘Tir na nog’ (2004), both at The Irish Museum of Modern Art, Dublin, ‘The Yugoslav Biennial for Young Artists’, Serbia-Montenegro, and ‘If I Can’t Dance’ De Appel, Amsterdam (2007). Mediation Biennale, ‘Gardens and Islands’, Poznan, Poland, ‘Micro-narratives : tentation des petites réalités’ at Musée d’art moderne de Saint Etienne, Order, Desire, Light, Irish Museum of Modern Art, Dublin, Through the Lens: New Media Art from Ireland, Beijing Art Museum of the Imperial City (2008), Coalesce: Happen-stance, Smart, Amsterdam, (2009), King Rat, Project Arts Centre, Dublin, Clocks and Seasons and Promises, Gallery Side 2, Tokyo, Forms of Reason, Lullin + Ferrari, Zurich (with Bill Woodrow & Mamiko Otsuba) (2010) and Into the Light: The Arts Council – 60 Years Supporting the Arts, The Model, Sligo (2012/13). Upcoming shows include The Black Moon, curated by Sinziana Ravini in Palais de Tokyo, Paris and a solo in The Irish Museum of Modern Art, Dublin (2014).
.
.
.
.
.
.
.
source: newsartnet

Isabel Nolan’s artwork utilizes textiles, steel rods, and primary colored paint to approach questions of anxiety, current events, and the human condition. Her work has a particularly erudite quality, with materials teased and propped to mimic symbolism and images in literature, historical texts, science, and art. Nolan’s work has been exhibited throughout her native Ireland and wider Europe, including at the Irish Museum of Modern Art and the Musée d’art modern de Saint Etienne. With her first solo exhibition in the United States fast approaching, artnet News caught up with the scholarly artist to hear about her early diagrams of brains and ideas she is currently entertaining for her next body of work.