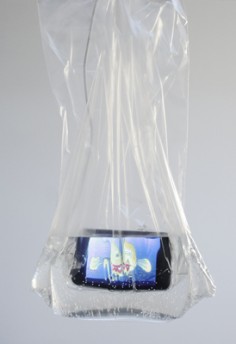 Jack Strange’s Deep Down investigates experiences that are perceived as reality in human consciousness and feeling. Strange’s mixed media installations find the unreal in the familiar by animating household things and nature in this multi-room exhibition. Metaphors about life, death, and daily experience guide the viewer to imagine what is possible beyond our daily reality.

Strange recontextualizes familiar objects so that our perception of these things is taken beyond our daily understanding of technology, food, and the body. A fruit pit becomes a brain listening to music, pieces of vegetables spring into action, and something so tangible as blood becomes surreal. With the variety of daily objects that Strange uses, it seems possible that he could create human metaphors with almost anything in our physical surroundings. It’s left up to the viewer to decide whether the actual or the metaphorical is perceived as reality in human consciousness.
.
.
.
.
.
.
source: worldclassboxingorg

Jack Strange’s work is really about nothing. Drawing from a toolbox of quintessential Conceptual art strategies from the 60s and 70s, British artist Jack Strange reframes the “dematerialized” in our increasingly virtual, laptop-dependent lives. As Lucy Lippard recalls in her catalog essay for the Centre Pompidou’s 2009 exhibition, Voids: A Retrospective:
With art history backing them up, Conceptual artists broke the rules of conventional art by emphasizing emptiness, cancellation, the vacuum, the void, the invisible. They made blank films and empty squares; they locked the galleries and practiced doing nothing…The bedrock of the notion of “nothing” in art was often a fusion of art and life, or at least a narrowing of the distance between the two. 1
Figuratively and at times more literally, Strange’s work hearkens back to the notion of “nothing” in art, which surfaces in his work through the banal and mundane, but more poignantly when the artist draws parallels between the void of the virtual realm and the physical realm of objects. His humorous, nearly satirical approach to highlighting removal and emptiness culminates in Into a Puff of Virtual Smoke (2008). The three-minute, looped video depicts a completely black background, periodically interrupted by a digitally animated puff of smoke. The sound and image represent the animated icon produced on Macintosh computers when one deletes a file. It is a symbol of erasure, the removal and absence of information. One could perceive it as the death of information, but it amusingly recalls an anti-climatic version of the big bang. Strange’s void here is a play on presence and absence, something which can be seen through out his practice. He recontextualizes a quotidian symbol within the frame of a blank screen, provoking the viewer to ask: what is being erased? Although the answer is null and void, what we do know is that it’s a small, futile gesture thrown into the ether.
Our repertoire of everyday objects has rapidly changed over the past few decades due largely to advances in technology. Today an iPhone is indicative of a quotidian object than a Campbell’s Soup can. As we can see in Into a Puff of Virtual Smoke, the artist explores the expanded possibilities of appropriation in our digital age. Strange takes this one step further when he presents a laptop computer as a ready-made of sorts.
.
.
.
.
.
.
source: artecapitalnet