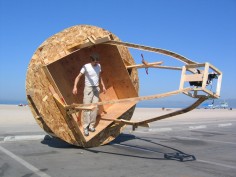 Balance Study is a video by Jacob Tonski that studies balance filmed from a fixed horizon. Tonski says the project began as a metaphor for the disorienting experience of art graduate school.
.
.
.
.
.
.
.
source: dudecraft

Jacob Tonski has built an intriguing machine and produced a really cool video. Bonus points for holding some of it together with wood clamps. Makes it look so prototypish!
.
.
.
.
.
.
.
source: vimeo

Jacob Tonski is a pragmatic optimist whose work explores dynamic balance through kinetic metaphors.
A self-adjusting platform makes everyone the same height, probing ideas of equality and the origins of power. A larger-than-life top spins about the room, wobbling through themes of pleasure, danger, youth and decay. A sofa teeters, standing on one leg, musing on the stability of the social structures we build. These and other human-scale objects, both amusing and threatening, find an uncanny identity between toys and tools. The forces of time and gravity serve in these works as foils for those things we are powerless to direct in our lives, and with which we must instead dance and negotiate.
Tonski holds an MFA from the Design | Media Arts department at UCLA. He studied computer science at Brown University and worked as a Technical Director at Pixar Animation Studios. He was a 2010 fellow at the Carnegie Mellon University Studio for Creative Inquiry. He is currently an assistant professor of art and interactive media studies at Miami University, Ohio. His work has been shown in Brazil, Germany, Greece, Portugal, Spain, Italy, China, Finland, The Netherlands, Online, and throughout the United States.