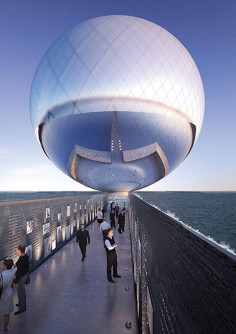 source: inhabitat
“The sustainable architectural culture that aspires the coexistence of human, nature and the architecture itself” is a core value of Heerim Architects and Planners in South Korea, the team behind a sparkling orb designed for Santa Monica Pier. A finalist in the biennial site-specific 2016 Land Art Generator Initiative design competition, which promotes the uptake of energy-generating public art that informs, delights, and uplifts communities and visitors, The Clear Orb reveals a playful approach to holistic design. Using transparent luminescent solar concentrators, the installation is purportedly capable of producing up to half-a-million gallons of fresh water each year for California.
.
.
.
.
.
.
.
source: designboom
for the 2016 land art generator initiative, a team of designers from south korea has conceived ‘clear orb’ as a proposal for sustainable infrastructure in santa monica, california. the 40-meter diameter glass sphere produces fresh water from the sea, and provides energy to the city’s electrical grid.

jaesik lim, ahyoung lee, jaeyeol kim, and taegu lim have designed ‘clear orb’ to appear as if it is floating on the surface of the ocean. while a translucent glass upper half refracts impressions of the surrounding landscape, the lower hemisphere’s reflective, mirror-like surface glitters in the sunlight. the installation is accessible from the santa monica pier, where a pathway subtly slopes below the surface of the water. the exterior walls of this ‘contemplation walk’ act as a wave power generator installed along the existing breakwater. the path’s interior walls are lined with a list of extinct animals, offering an opportunity to contemplate how humans might better co-exist with nature.

the surface of the orb is made up of transparent luminescent solar concentrators, which supply power to circulate the water inside. the inner space of the orb is a solar still that produces fresh water from seawater through evaporation and condensation. this desalinated water pours down through the step fountain supporting it from below — an artistic interpretation of the power of light and water to give life.

the oscillating water column wave power plant runs along the 300-meter sea-facing edge of the ‘contemplation walk,’ and provides additional energy to the solar distillation pumps and the electrical grid of the city.

‘clear orb’ forms part of the submissions for the 2016 land art generator initiative – a platform whose international design competition provides an opportunity for creatives to reflect on the nature of energy infrastructures and what they can aspire to be in their built form. this edition’s competition winners will be announced in october 2016.
2016-land-art-generator-initiative-clear-orb-designboom-02