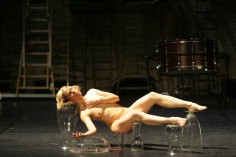 The Belgian choreographer/visual artist/theatre director Jan Fabre has created the second part of his major dance trilogy devoted to man and the human body.

“History of Tears” is about the bodily fluids – our amazing and irrational tears of happiness and pain, our sweat as well as the tears of God falling from heaven. Drawing inspiration from the many tears represented in Andersen’s world, including “The Little Mermaid”, Fabre poses questions such as: “What right do lovers have to weep?” and “When were the tears of human sensitivity transformed into female sentimentality?” Jan Fabre was born in Antwerp in 1958 and was one of the major stars of the performing arts during the 1990s. Although he chooses not to define himself as a choreographer, his performances nonetheless focus on the body as an expressive media. His performances draw on a wide range of artistic genres, including dance, spoken drama, and visual art. The results are choreographed and highly visual and dynamic performances.

Explaining his History of Tears, the Belgian director Jan Fabre (1958) points out that the human body consists for 75% of water, which he calls ‘the tears of the body.’ They can be tears of joy or sorrow, or of sweat which is created by fear and stress, or they can be the tears of god, raining from the sky, he explains. But where do all these tears ultimately come from? Are they merely chemistry of the body, or is something else at play? Why has at a certain point ‘sensitivity’ turned into ‘sentimentality’? These are some of the questions Jan Fabre poses himself in the new production for his company Troubleyn. Besides his work in the theater, Fabre also is active as as a visual artist, choreographer, author and opera director. He became internationally known with his production The Power Of Theatrical Madness, which opened at the 1984 Venice Biennale. From that time on, his large-scale theatrical productions followed one after another. As a visual artist, he stirred the art world with his ‘Bic-art’ drawings and his work at the Royal Palace in Brussels, covering its ceiling with the shields of scarabees. The worldpremiere of History of Tears has opened the Festival d’Avignon in July 2005.

Jan Fabre is a drawer, sculptor, playwright and stage (drama and opera) director, choreographer and stage designer of European renown.

He studied in the Decorative Arts Institute and Royal Academy of Fine Arts. In his early years, he was a decorator, set and costume designer; in 1976-81, active in the field of performance art. At the time he too wrote a series of plays. His intellectual furnishing includes an interest in insects – inherited from a grand-grandfather, a renowned entomologist. Observing the microcosm of insects has become a source of inspiration for Fabre, as was the case with the ‘hour of the blue’ concept, again, the great-grandpa’s (night giving up the space to the daylight). A series of giant drawings has thus been conceived, the material being artificial silk, under the title of Hour of the Blue. Fabre’s driving force is intuition, and, instinct. He is much inspired by dreams, too. Thousands of his drawings are meant to compose a sort of a diary.

Drawing is for him the primary field of artistic research, as he himself says, ‘the simplest way to make out a magical rug of a[n ordinary] square. Or, to create a heavenly body out of an insect.
In drawing, anything is possible’ (interviewed by Jan Hoet). Insects are a propelling force behind Jan Fabre’s visual as well as theatrical work. He is fond of drawing – sculpture relationships, a deepened search into drawing being ‘drawing sculptures’ whereas into sculpture, drawings in which he would use peculiar sculpting techniques. Example being 19 m long and 10 m high drawings such as The flying cock, or, The road from the Earth to the stars is not smooth, or, the ‘drawing sculptures’: House of flames III, Scissors’ house.
‘Drawing is for me the way I speak, a language with a directness of enlightened stammering, one approaching the border of pure thinking. It is a form of ecstasy, a swelling sequence of dreams and visions getting enclosed in the act of drawing. There, a new temporal and spatial dimension emerges: the labyrinth of night. As it is with our own astral bodies, also a drawing has its peculiar aura. I am fascinated with a thought that people could not only see my visual art, but also, actually hear it. It is for this reason that I am fascinated, obviously with a voice singing in the midst of fear’, Fabre told Jan Hoet.

Since 1980, Jan Fabre has been engaged in theatrical, operatic, and dance performances. Troubleyn, a creative-work association established by Fabre, supports realisations of his projects. In theatre, he has been inspired by his own performance-art experiences which has borne fruit in, among other things, drawing much attention to body expression in acting. For him, the aesthetic, mental and energetic facets of spectacle are of equal import. His theatrical work is distinct with the strength of vivid stage images. Fabre is both the author as well as set and lightning designer for his performances. An important dimension of this work is a celebration of the qualities of time and space, provoking the spectator to somehow ‘switch’ his or her perception. Fabre’s theatre space is closed-off. In dance shows, he has employed his own visual-art concept of ‘diffracted space’; there, the space is set in motion while individual moves of dancers get limited. These spectacles picture a tension between ordered universe and chaos.

International renown became for Fabre in 1982 with his 8-hour-long performance entitled This is the theatre one should have awaited and expected. A famous event was also the 1984 show The power of theatrical frenzy staged to open the Biennial in Venice. Fabre made his debut as a choreographer with Dance sections (1987), presented as part of the documenta 8 in Kassel, and meant as initial study toward Fabre’s first opera, staged 1990 at the Flemish Opera, Antwerp. The opera, named Glass in the head will be made of glass was an initial part of the operatic trilogy headed The Minds of Helen Troubleyn (music by Polish composer Eugeniusz Knapik). In 1989, at invitation of William Forsyth, Fabre staged three shows featuring the Frankfurt Ballet. Again in Frankfurt, he produced the widely presented ballet performance Sound of one clapping hand. In 1990’s, Fabre made the human body a subject-matter of his theatrical trilogy composed of: Sweet temptations, Universal copyrights 1 & 9, and Luminous icons. He also produced a series of chamber plays, written mostly for Els Deceukelier, an outstanding actress. 1997 saw a cycle of dance solos entitled The Four Temperaments, whilst the 1998/99 season was one of two spectacles: a big-sized play The end comes a little bit earlier this century. But business as usual, along with one for two to play – The values of night.

Jan Fabre’s stage output is a persistent search for the absolute beauty and spirituality. He describes himself and his dancers as ‘the warriors of beauty’. Himself, he dances, as it were, on the high-set borderline between the art and life, driven by that paradoxical concept of his: ‘I attempt at creating as little amount of art as is possible’. Fabre is deemed to be a significant personage in the visual arts and theatre of 1990’s. His productions have been staged in several countries of Europe, as well as in the USA, Japan, and Australia. He approaches all the artistic fields he cultivates with equal seriousness, while too advocating interdisciplinary art. For many years now, Fabre has been a contributor to the renowned Antwerp ‘deSingel’ arts centre. His visual works are displayed in significant European museums and galleries.

The Rozdroze’99/Crossroads’99 festival provides Polish spectators with an opportunity to see Jan Fabre’s work shown in this country for the first time.

Jan Fabre lives and works in his native Antwerp. Contemporary art aficionados know him for his powerful figurative or abstract drawings executed in blue ballpoint and his sculptures fraught with surface ornament. Fabre’s early drawings and sculptures of the 1970s reveal his abiding interest in performance art. The drawings often explored themes or motifs for a range of performance pieces, and the sculptures frequently arose out of live acts involving the body. Fabre’s works, which treat the weighty subjects of life, memory, and death by indirection, often come across as great feats of physical endurance.

The drawings, consisting of dense, monochrome fields of all-over hatching marks, eventually grew in scale. They were displayed either freestanding, with their rectos and versos exposed to view like pieces of sculpture, or glued onto forms ranging from bathtubs and sheds to the vast Castle Tivoli at Mechelen (1990), near Antwerp. The copper thumbtacks that Fabre employed in the early sculptures to encase representations of his body, as well as accompanying objects, eventually made way for (usually green) iridescent jewel beetles. The latter were affixed to invisible armatures of wire-mesh, suggesting three-dimensional things such as a urinal, a microscope, a Latin cross, a dress, and a hooded mantle. Today, the artist encloses voids with thin slices of human bone mounted on wire-mesh supports.

Fabre’s interest in performance art is reflected in his manifold activities as actor, author, choreographer, and film and theater director. This Belgian artist with seemingly inexhaustible energy is also the co-founder, publisher, and co-editor of Janus, a quarterly magazine on art and culture. Fabre has had over 50 one-person shows since 1984 and has taken part in numerous group exhibitions including the Venice Biennale (1984 and 1997), the Bienal de São Paulo (1991), Documenta IX (1992), and the Istanbul Biennale (1992 and 2001). This interview took place late one night at a terrace on the main civic square of Bruges, following a rehearsal of Fabre’s new theater production Parrots and Guinea Pigs (2002).