THE DOG DAYS ARE OVER 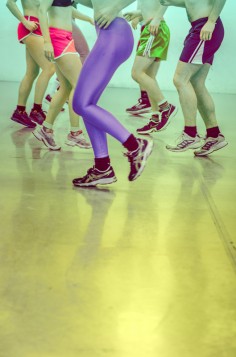 THE DOG DAYS ARE OVER will be Jan Martens’ first work for a group of dancers since his debut I CAN RIDE A HORSE WHILST JUGGLING SO MARRY ME from 2010. In season 2011 – 2012 he created the work PRETTY PERFECT for the dancers of Conny Janssen Danst, which was a command from Dansateliers. It was a short work for six dancers that was completely constructed around one physical action: the jump. This pre-research will be developed through in season 2013 – 2014 to an evening full program with eight new dancers.

Starting point for the work is a quote by American photographer Philippe Halsman who said back in 1958:

“When you ask a person to jump,
his attention is mostly directed toward the act of jumping
and the mask falls so that the real person appears.”

THE DOG DAYS ARE OVER will be a work that tries to reveal the person behind the dancer. To reach this, a very complex, mathematical, dynamic and tiring choreography is constructed, which is performed almost completely in unison. The difficulty degree of the choreography is so high, that the dancers eventually will go wrong. It is there where the mask falls. The dancer is defined as an idle and purely executing species, striving for perfection.

But THE DOG DAYS ARE OVER has also a more reflective aim.

It wants to provoke thoughts about the role of dance and art, it wants to question the audience’s perception about dancers, choreographers, audience and culture policy: Where lies the thin line between art and entertainment? Who are we as an audience, coming to see dancers suffer as if we are watching bullfights in an arena? Is contemporary dance striptease for the upper class?

THE DOG DAYS ARE OVER wants to make the watcher shift between being in the experience and reflection on that same experience. The performance will be a work that brings the spectator in a trance, but will also create a distance and time for that same spectator to question his or her reasons to be where they are right now: in the theatre.
.
.
.
.
.
.
.
source: janmartens

Jan Martens (Belgium °1984) studied at the Fontys dance academy in Tilburg and graduated at the Artesis Conservatory for Dance in Antwerp in 2006. He performed in the work of amongst others: Koen De Preter, United-C, Mor Shani and Ann Van den Broek. In 2009 he started to develop his own choreographic work. In a short time his work received critical and popular acclaim which resulted in a growing number of shows performed mainly in the Netherlands and Belgium.

His first major work was i can ride a horse whilst juggling so marry me (United-C,2010), a work which portrayed a generation of young women in a society dominated by social networks. Since 2011 his work is produced by frascati.

There he created two ‘love duets’ in 2011, both investigating the cliché portrayal of a man – woman relationship: a small guide on how to treat your lifetime companion and sweat baby sweat. The first one is selected for Aerowaves, a european network supporting young choreographers. The work has been performed more than 40 times and is continuing to travel in and outside of Netherlands and Flanders next season, just like sweat baby sweat.

Next to these works he made guest choreographies for dansateliers, Meekers, and AHK.
In march 2012 he created pretty perfect, a coproduction by dansateliers and Conny Janssen Danst.
In 2012 – 2013 he created the solos BIS for Truus Bronkhorst, La Bete for Joke Emmers and VICTOR, a duet for a boy and a man together with Peter Seynaeve.

All Jans works explore the possibility of a perfect balance and symbiosis between story-telling and conceptualism. He is not trying to create a new movement language, but instead he molds and recycles existing idioms and places them in a different setting, so a new idea emerges.
In his work the beauty of the incomplete human being stands up front, rather than to excel in choreographic complexity or physical virtuosity.