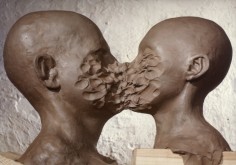 This is a study, decidedly pessimistic, of some of the base types of dialogue people have with each other, and the ways that these dialogues can go horribly awry.

In the first segment, an exercise in forced conformity, Svankmajer “brings to life” a famous painting by Arcimboldo, a painter known for his portraits of human faces made of fruits and vegetables. This segment has the feel of a relief painting in motion… the plane of existence is flat, but all objects are 3-dimensional.

The “vegetable head” animatedly waltzes across the “landscape” which it inhabits… a rough-looking wooden platform of some sort, until it meets another head, constructed of mechanical drafting products. The two attack each other, until one has been “eaten” by the other (the vegetables “lose”). After “eating”, the winning head vomits up the loser, who takes on a look which is a rough hybrid of the two. Of course, the two heads attack each other again.

This goes on, with an occasional new head getting involved, until both heads are identical bald human men. They then vomit multiple replicas of themselves.

The second segment seems to be about love gone sour… two full-size clay figures, male and female, sit at opposite sides of a table. They reach across, take each others hands, smile, and finally kiss.

The kiss turns into another “consumptive” act… the clay figures melt into each other, becoming a flowing, sexual blob with occasional limbs. Eventually, they regain their identities at their respective sides of the table, but look out! There is a newcomer! A small, leftover, formless blob makes moves towards both “parents”, but is rejected by each.

The lovers obviously hadn’t planned on this, and now they hate each other. They beat each other into clay pulps.

In the third segment, the two bald human heads from the first segment, now fully dimensional on what is clearly a tabletop, gauge each other by eye, trying to figure out how to interact without fighting.

They cooperatively offer objects from their mouths that they think would help the other… toothpaste vs. a toothbrush, a pencil vs. a sharpener (held by disgusting tongues), etc.They start off okay, but eventually in their haste anticipate the other’s needs, they start getting things wrong… a piece of bread gets a shoelace through it, the toothbrush goes into the pencil sharpener (not a pretty sight), etc., until the two collapse into panting wrecks, torn up by their hasty actions.
.
.
.
.
.
.
.
source: skwiglycouk

Surrealist genius Jan Svankmajer’s stop frame masterpiece ‘Moznosti dialogu’ (Dimensions of Dialogue) drew on his experience with puppetry, experimental theatre and his role in the Czechoslovakian Surrealist Group, to create an examination in three parts of how humans communicate and what can often go wrong.
In the first part (Eternal Dialogue), the most famous and influential section, a head created from animated fruits and vegetables meets another head made of metal tools and mechanical parts; they attack each other and the tool head swallows and vomits up the vegetable head, who now incorporates some metal tools. They attack each other again, and so it goes on with the heads slowly changing their construction. This sequence bears similarity to oddball sixteenth-century artist Giuseppe Arcimboldo’s paintings in which images were constructed of fruit and perfectly encapsulates Svankmajer’s aesthetic of familiar, banal household objects brought disturbingly and maliciously to life.

In the next sequence (Passionate Dialogue), two young clay lovers embrace, melt together, and then spit out a smaller clay ball. They reject the ball and are upset by it, and because of this, the lovers fight and destroy each other. In the third chapter (Exhausting Dialogue), clay heads of two bald middle-aged men try to cooperate by spitting useful objects to each other out of their mouths, until in their eagerness to please, they start combining the objects with disastrous results.

Made with the aid of animator Vlasta Pospisilova, ‘Dimensions of Dialogue’ is a classic of surrealist stop frame, won many awards worldwide and perhaps had the most international impact of any of his films. It cemented Svankmajer’s reputation and along with the directors other films, was influential on many future works such as the films of The Brothers Quay and the music video for Peter Gabriel’s ‘Sledgehammer’ (1986), voted the best ever music video in an MTV poll.

Svankmeyer explored this vision further in films such as the feature length ‘Neco z Alenky’ (Alice) (1988), in which he retold Lewis Carroll’s Alice in Wonderland in his unique and unsettling style, with a mixture of live action and stop-frame animation. Here The White Rabbit is a stuffed rabbit that leaks sawdust, meaning he constantly has to eat more while the other inhabitants of Wonderland are mostly made of household objects, bones, or food. ‘Alice’ funded by the UK’s Channel 4, during their heyday when they were the worlds great investors in animation, is a distinct take on Carroll’s story and for many people the most interesting screen version, more an unsettling tale of Victorian creepiness than the more familiar cartoon caricature of Disney’s 1951 version or Tim Burtons 2010 CGI stereoscopic 3D hit.