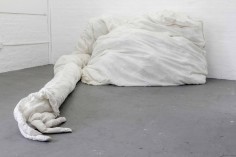 source:blankprojectscom
JARED GINSBURG
Born in 1985, Jared Ginsburg lives and works in Cape Town. His work has been exhibited both locally and internationally. To date, Ginsburg has had six solo exhibitions, most recently Measuring Nothing at blank projects in 2018. Group shows include open agenda, blank projects, Cape Town; Both, And at Stevenson, Cape Town (2018), blank at Galerie Guido W. Baudach, Berlin (2018), Sculpture at the Institute of Contemporary Art Indian Ocean, Port Louis, Mauritius (2018), More for Less at A4 Arts Foundation, Cape Town (2018), A Painting Today at Stevenson, Cape Town (2017), I Love You Sugar Kane at the Institute of Contemporary Art Indian Ocean, Port Louis, Mauritius (2016), Artists and Architecture, Variable Dimensions, curated by Gregory Lang at the Emily Harvey Foundation, New York (2016), and The Morning I Killed A Fly at Galleria Mazzoli, Modena, Italy (2015). In 2018, Ginsburg participated in the Idris Naim residency programme in Oaxaca, Mexico, culminating in the group exhibition Hacer Noche at the Centro Cultural Santo Domingo in Oaxaca de Juarez.

For more information about the artist, please visit http://www.jaredginsburg.info.
.
.
.
.
.
.
.
source:artthrobcoza
Ars Fischer and Jared Ginsburg are distortionists, enlarging, twisting and severing out of shape the human form. Although working in their own distinctive media their interests and modes have at times a interesting cross-over. Whimsically grotesque Fischer and Ginsburg both have been associated with neo-Dada.

Below the Knee and Big Foot are works that represent severed sections of an over-sized leg, and yet they contain ideas divergent in their morbidity. While in Fischer the idea of a crushing destruction of a Leviathan-like monster seem at the forefront of the conceit, Ginsburg’s Below the Knee conversely is a pathologically more disturbing work referencing murder tropes and their representation. It is there, perhaps, where the two artists themes diverge the most. Where Fischer’s themes seem mostly about the destructive forces of power, both physical and institutional, Ginsburg expresses more interest in personal psychology and art historical representations of the body.

Jared Ginsburg (born 1985, Cape Town, South Africa) graduated with a BA in Fine Arts from the University of Cape Town’s Michaelis School of Art in 2010, where he won the Michaelis prize as the top graduate. He currently lives and works in Cape Town.
.
.
.
.
.
.
.
source:friezecom
Jared Ginsburg uses art-making to explore alternative modes of knowledge production and transfer. He recognizes art as a tool, a means to test and probe the world, hoping to nurture new strategies for productive engagement. Ginsburg employs a range of media types, including painting, sculpture, drawing, video and performance.

For his presentation at Frieze Frame, Ginsburg presents a selection of new works that exemplify his multimedia practice. Kinetic sculptures are integral to his repertoire, created by combining found objects in movement with rudimentary methods of construction. In his “Wall painting” series, large-scale canvasses are layered with histories of note-making and drawings – a kind of private archeology, which covers and reveals through a process of painting-over and sanding-away. Seeking “indeterminacy or chance operations” in his process, Ginsburg’s studio plays a significant role; at once a lab, an instrument and a character in conversation.