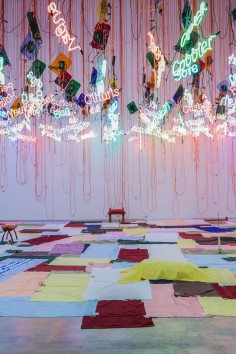 Before his untimely death from heart failure in 2006 at the age of 41, Jason Rhoades built large scale installations based upon an ever growing collection of ‘pussy words’, slang words for female genitalia, that he gathered and subsequently scripted in black light and coloured neon. He was described in his obituary in the Guardian as follows “He addressed social taboos; it’s almost as if he were constructing sculpture with irony. He was an American artist not of the East Coast – he was a California artist with an interest in architecture, popular culture, county fairs, extremes of lifestyle, sports, entertainment, music.”

Jason Rhoades began collecting the ‘pussy words’ on the internet and continued in a a ceremony known as the ‘Pussy Word Harvest’ the ritual centre piece of a series of ‘soirees’ that took place in his Los Angeles studio. These Thursday night events, to which he invited selected guests who included a diverse range of minor celebrities from the film, music and fashion worlds, were held every month for six months. Dressed in white and arriving promptly at a prescribed time, guests were asked to contribute names for the female genitalia. These interactive art events were dubbed by Jason Rhoades the ‘Black Pussy Soirée Cabaret Macramé’ and by the end of the series had contributed about 7500 euphemisms to which he added to the mix, ‘poetic materials’ among them bales of Chinese rag rugs, camel saddle foot stools, part of an array of unusual artifacts he gathered together.

In common with other artists of his generation Rhoades delighted in confronting society’s taboos and while some found what they regarded as his blatant sexism offensive he was acknowledged for continuing a wave of contemporary art that pushed the boundaries of what was acceptable. His approach to making installations was to completely fill a space with the lights and artifacts he gathered together to create a complete environment.

The work on show in ‘Lightness of Being’ recreates something of that environmental quality with a massive work developed from the Black Pussy Soirées. It includes a bale of Chinese rugs, saddle footstools and a strange table upon which is placed a directory of the complete ‘Pussy Word Harvest’. Around the walls a series of wall mounted pieces continue the harvest illuminating the space and extending the installation into the body of the gallery.