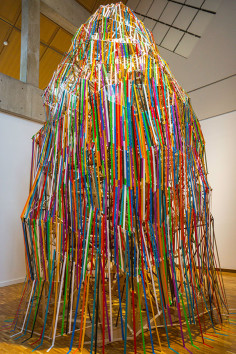 My father was an artist who was adept at both painting traditional Asian landscapes with ink on paper and archetypal Western landscapes with oil on canvas. As a child, I was always intrigued with the fluidity in which my father navigated these vastly different approaches in painting. This early childhood fascination with depictions of landscape attuned my sensibilities toward natural environments and its ability to influence and reflect perceptions of culture, history and place.

A sense of location within one’s physical space and culture plays a crucial role in the creation of my work. While ideas emerge from images associated with the natural landscape, I am drawn to the incorporation of debris; overlooked or often discarded human-made materials with finite functional life spans. The configuration of constructed forms and images is an amalgamation of natural and built environments and challenges the viewer with conflicting contexts of place, setting and their own sense of orientation in the space.

The subversion in visual familiarity of natural landscapes instigates an observer’s sense of disbelief, enough to momentarily disassociate reality and perception. Therefore landscapes become a primary tool to explore and question the phenomenological experiences of environments.
.
.
.
.
.
.
.
source: jasonyi

He has exhibited nationally and internationally in places such as New York, Philadelphia, Washington DC, Chicago, Los Angeles, Japan, China, Korea, Vietnam, Italy and Austria. Recently, his installation was included in the international exhibition at the Inside-out Art Museum in Beijing, which ended in spring 2013. In 2010, “Legend of the White Snake” sculptural work was installed on the roof top sculpture garden at the Madison Museum of Contemporary Art on a long-term loan to the museum. His awards include Joan Mitchell Foundation 2014 Painters & Sculptors Grant, Mary L. Nohl Foundations Fellowship in the established artist category and Kamiyama Artist in Residence Fellowship, supported by the Japan Foundation. He was selected as the Milwaukee Artist of the Year in the year 2006 by the Milwaukee Arts Board.

Among other places, he participated in exhibitions at the Asian American Art Center in NYC, Platform China Artist in Residence Program in Beijing, Moran Museum of Art in Seoul, Kamiyama Art Museum in Kamiyama, Japan, Hotel Pupik in Schrattenberg, Austria, Madison Museum of Contemporary Art and Milwaukee Art Museum. His solo exhibition “Yellow Mountains and Other Places” at the Dean Jensen Gallery in Milwaukee has been reviewed in the Artforum Magazine’s Critic’s Pick’s by Lori Waxman.

His works are included in the permanent collections of the Milwaukee Art Museum, Kamiyama Museum of Art in Japan, Korean Cultural Center in Los Angeles and the Edward F. Albee Foundation in New York. Jason S. Yi lives and works in Milwaukee, Wisconsin in United States.
.
.
.
.
.
.
.
source: beloitedu

Yi has exhibited extensively in major cities across the U.S. and abroad in Austria, South Korea, Vietnam, and Japan, and his installation and video pieces have also recently become part of permanent collections at the Milwaukee Art Museum and the Madison Museum of Contemporary Art. Rather than being tied to one specific medium, he readily explores drawing, sculpture, photography, installation, and video.

The artist has created a site-specific installation in the Wright Museum that fills nearly half of the North Gallery. Over a period of two days, Jason and his team carefully constructed a mountain of tables and metal folding chairs, which were then bound with countless rolls of colorful duct tape and topped with a cloud of reflective foil. The resulting mixed assemblage essentially transforms these every-day utilitarian objects into a work of art. This imposing structure, although securely anchored, embodies a sense of chaos and movement as it spills into the viewers’ space. Jason describes his design aesthetic and inspiration further:

“A sense of location within one’s physical space, culture and history plays a crucial role in the creation of my work. While images and ideas often begin with the landscape, I am also drawn to the incorporation of non-art materials (e.g., foam, packing peanuts, bubble wrap and PVC tubes) and the juxtaposition of ambiguous imagery, deliberately subverting viewer’s visual expectations. My work invokes the paradoxical notion of “harmonious conflict” where compositional/conceptual relationship of materials and images are questioned and yet valued.”