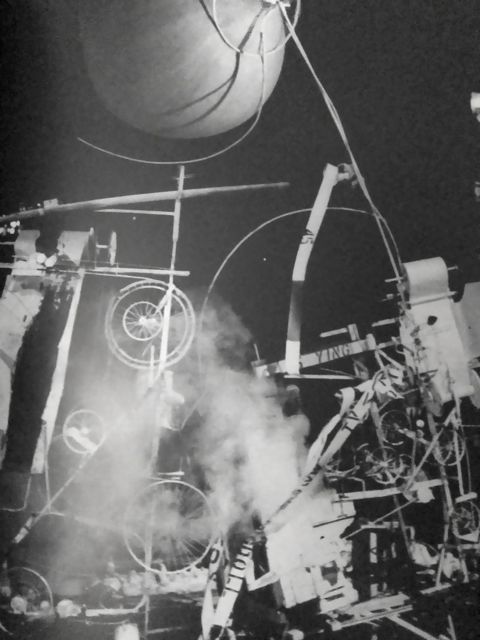 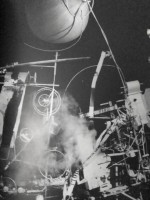 JEAN TINGUELY’S “Homage to New York” was billed as the ultimate homemade gadget — a towering contraption composed of found junk, dismembered bicycles, dismantled musical instruments, glass bottles, a meteorological balloon and electric motors in questionable condition. It was slated to come to life and spectacularly self-destruct in a one-night-only performance for some 250 patrons and reporters in the Abby Aldrich Rockefeller Sculpture Garden at the Museum of Modern Art on March 17, 1960. And self-destruct it did, but not quite according to plan.
Multimedia

A sortable calendar of noteworthy cultural events in the New York region, selected by Times critics.
Go to Event Listings »
Bottles shattered, wheels spun, colored smoke plumed up into the air, and the machine’s various metal components crashed and clinked atop a piano, creating an arrhythmic soundtrack. But when sparks escalated into flames, and a portion of the machine broke away, crashing into an NBC camera crew, a nervous firefighter intervened and doused the machine with water, sealing its fate.

Mr. Tinguely’s self-destructive sculpture had failed — and thereby, in a sense, succeeded. Mr. Tinguely, a Swiss artist who died in 1991, was by 1960 well known for such Dada-inflected works; he posed with the wreckage after the performance and took a bow.

Fifty years later artists are still grappling with the idea of creation about destruction, a topic that remains starkly relevant in an age of perpetual war, terrorism and now radiation scares. A new three-part exhibition at the Swiss Institute in New York will present a progression of artworks tackling this theme, using the 50th anniversary of Mr. Tinguely’s performance as its jumping-off point. (A broader version of the show was on view at the Museum Tinguely in Basel, Switzerland, last fall.)

“We wanted to show a very distinctive part of destruction — not just destroying, but how destruction itself can be a means of expression for artists,” said Gianni Jetzer, curator with Chris Sharp of the exhibition, “Under Destruction,” the first chapter of which opened on Wednesday.

The installation will unfold thematically over the coming months. Chapter 1 will focus on the moments before destruction occurs, Chapter 2 (opening May 18) revolves around destruction itself, and Chapter 3 (opening June 29) will muse on its aftermath. But it’s not all gloom and doom; here is a selection of what to expect throughout.
.
.
.
.
.
.
.
.
source: objetosmagicoswordpress

Auto-destructive art is primarily a form of public art for industrial societies.

Self-destructive painting, sculpture and construction is a total unity of idea, site, form, colour, method, and timing of the disintegrative process.

The amplified sound of the auto-destructive process can be an element of the total conception.

The artist may collaborate with scientists, engineers.

Self-destructive art can be machine produced and factory assembled.

Auto-destructive paintings, sculptures and constructions have a life time varying from a few moments to twenty years. When the disintegrative process is complete the work is to be removed from the site and scrapped.