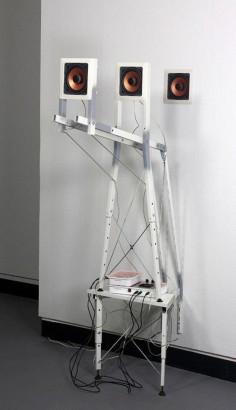 source: jeff-carternet
Jeff Carter lives and works in Chicago. He is Associate Professor in the Department of Art, Media and Design at DePaul University. Jeff earned his BFA at the University of Colorado, Boulder (1992) and his MFA at The School of the Art Institute of Chicago (1998), where he received a Trustee Scholarship.
Jeff has exhibited his work in Chicago at the MCA, the Renaissance Society, and the Chicago Cultural Center. His work has been included in group exhibitions at Museum 52 (London), the Kunsthalle Hamburg (Germany), the Kaohsiung Museum of Fine Arts (Taiwan), and the Hayward Gallery (London). His solo shows include Kavi Gupta Gallery (Chicago and Leipzig, Germany), and Spencer Brownstone Gallery (New York). Jeff has received several grants, including the 2001 Artadia Award. Reviews of his work have appeared in FlashArt International, Tema Celeste, The Art Newspaper and The Chicago Tribune. His 2001 kinetic sculpture A Vague Sensation of Paradise has recently been added to the permanent collection of the Smart Museum of Art (Chicago).
.
.
.
.
.
.
.
source: jeff-carternet
Often occupying both physical and temporal space, my sculpture has always incorporated both conventional and experimental media, including woodcarving, metalworking, installation, kinetics, microelectronics and video. While it tends to be visually diverse, the friction between object and memory has been at the conceptual core of my sculptural practice since 1994. The images, objects and narratives of a particular place or experience undergo distortions each time they are represented, and it is these forms of abstraction I explore in my sculpture.
Earlier bodies of work have utilized the physical residue of my traveling – the souvenirs, postcards, snapshots and videotapes – as central elements of the sculpture, forcing them to reveal their own inadequacy, disengagement or transformation, to subvert the nostalgic ideal, or to disrupt the usual implications of value and validation in a cultural artifact. In later works I utilize the physicality of scale, motion, and orientation to extend and challenge the conventional representation of landscape. These pieces define specific places as indefinite spatial constructs that complicate the certainty of “being there,” and are part of a larger attempt to relate a fragmented travel narrative through architecture, landscapes and souvenirs.
I have been using IKEA products as raw material for several years, and continue to be interested in extracting conceptual value from it. I am currently exploring the relationship between the Modern avant-garde and contemporary consumer design culture. In my recent work, I attempt to articulate various points of connection and rupture between IKEA and the Bauhaus by constructing scale models of demolished or unrealized buildings by Bauhaus founder Walter Gropius using “hacked” IKEA products such as tables, bookshelves and flooring.