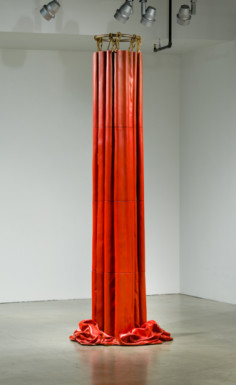 source: artandcakela
Jeff Colson seems less enthralled with the transformative process than with the narrative potential of objects. In Stacks, the artist created a tableau of a generic table, filing cabinet and crate overwhelmed by stacks of paper. Upon closer examination, nothing is as it appears to be; everything is carefully crafted out of wood, urethane resin, and acrylic; a trompe l’oeil recreation of a memory. What appears as stacks of paper look like they could disperse at any moment, so the tension of that expectation is derailed when it becomes apparent that they are stationary objects. Something happened here and might happen in the future; time is part of this mysterious narrative. Colson’s other sculpture, Draped Column, is fashioned out of fiberglass, steel and acrylic. Standing ten feet tall and suggesting an elegant obelisk as much as a shower curtain, this curious sculpture raises questions: Is this a functional object? What function is implied? The title refers to an architectural element or a memorial, but this totem defies gravity and it unclear what could be memorialized. Instead, it exists as a conundrum, a surreal manifestation of an object of the imagination that shouldn’t be able to exist, but does so with its imposing, tangible presence. Draped Column holds our attention and our curiosity as a fully realized poetic statement.
.
.
.
.
.
.
.
source: maloneyfineart
For the past ten years Jeff has been working on a series of bas-relief sculptures, titled Notes,which focus on the ephemeral quality of paper, as a subject and a material and addresses the duality of Form vs Content. Paper, was once the repository of “pure” information, non physical, abstract. However, with the advent of digital technology, paper has become this very physical, concrete artifact. These particular works speak to the artist’s intense desire to exert some kind of control, or order, over an increasingly chaotic and unpredictable world. Each work depicts a peripheral accumulation of paper, once symbolic of the day-to-day frenzy of one’s life. As a single sheet it is barely there, but when accumulated, it becomes physical and symbolically loaded as information, emblematic of the systematization of our daily existence.

In these works there occurs a breakdown between positive/seduction and negative/defensive, reactionary impulses. This can be seen in the Shelter /Pavilion sculptures which are, on one hand, an elemental definition of home; which provides the universal need for cover, a place of refuge, providing protection from bad weather or danger, to shield, screen or insulate and protect against the elements. On the other hand, a discrete locale for celebration.

Jeff Colson grew up near the oil fields just north of Bakersfield, California. His father was a social worker whose do-it-yourself aesthetic, making everything from toys to homemade life jackets, informed Colson’s own identity as a “crackpot tinkerer.” In his sculpture, Colson refers to both that quirky, by-the-seat-of-your-pants decision-making process and Modernism’s purist grid. The sculptures are fabricated from both personal and cultural memory, often without referencing specific objects or images. The resulting forms are familiar, but aren’t real. Colson’s sculptures are physical documents of remembered reality. The sense of history is also literal as each piece can take months, even years to make.

Jeff Colson graduated from California State College, Bakersfield. His work is in the Collection of Count Giuseppe Panza di Buomo at the Museum of Contemporary Art in Los Angeles; the Sammlung Rosenkranz Foundation in Wuppertal, Germany; the Frederick R. Weisman Museum of Art at Pepperdine University in Malibu, California; Colección Júmex, Mexico City and in the Los Angeles County Museum of Art’s permanent collection.
Jeff Colson was awarded a 2012 John Simon Guggenheim Memorial Foundation Fellowship and a 2015 City of Los Angeles (C.O.L.A.) Fellowship.

The artist lives and works in Pasadena, California