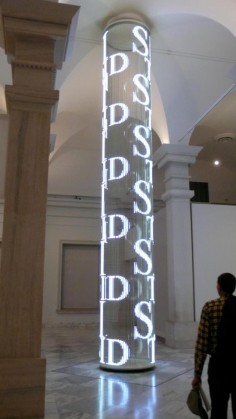 jenny holzer is famous for her short statements, formally called ‘truisms’. some are common myths while others are just phrases on random subjects in the form of slogans. the sayings include: ‘a man can’t know what it’s like to be a mother’, ‘men are not monogamous by nature’,
‘money creates taste’, ‘a lot of professionals are crackpots’, ‘enjoy yourself because you can’t change anything anyway’, ‘freedom is a luxury not a necessity’, ‘don’t place too much trust in experts’.

her medium, whether formulated as a t-shirt, as a plaque, or as an LED sign, always is writing,
and the public dimension is integral to the delivery of her work. starting in the late 1970s with the posters that jenny holzer pasted on buildings in new york city, and up to her recent
xenon projections on landscape and architecture, her practice has rivaled ignorance and violence with humor, kindness, and moral courage. often holzer’s work presents both explicit content and
minimalist aesthetics that make profound statements about the world of advertising and consumer society today. by presenting an assemblage of phrases that mimic advertising slogans through vehicles commonly used in advertising, such as electric billboards, coffee mugs, and commercials
on cable and network television, holzer questions what our eyes can see and what we can’t see in media, whether consumers today have any real control over the information that is provided to them. going back to her years as a painter at the rhode island school of design, holzer says she was influenced by the ‘clean, simple variations’ of minimalist aesthetics in artists like donald judd, mark rothko and morris louis.

in her seoul exhibit, the artist has carefully arranged the atmosphere of the gallery display so that viewers ‘won’t feel as if they are in las vegas’ as they enter the room installed with electronic screens. the meditative character of her art comes through with the installation of two sandstone benches carved with the artist’s writings, which exist both as chairs and as
art pieces by themselves. – jenny holzer was born 1950 in gallipolis, ohio, usa. she received a BFA in painting and printmaking from ohio university in 1972 and an MFA in painting from the RISD / rhode island school of design in 1975. holzer began to use text in her work while attending ohio university. an abstract painter while at RISD, she shifted to public projects and works that were ‘sublime and impressive’. jenny holzer moved to new york city in 1976 and
enrolled in the whitney museum independent study program, there she created the first ‘truisms’, in a first stage as a series of one-liners on posters pasted anonymously around the city. later she did installations with electronic LED displays that are attentive to architecture, monuments and memorials; and since 1996, large-scale xenon projections of text on buildings and landscape. she has realized these xenon projections in florence, rome, venice, rio de janeiro, buenos aires, oslo, paris, bordeaux, berlin, washington, new york city and miami. holzer received the leone d’oro for her american pavilion installation at the 1990 venice biennale, was the recipient of the 2002 kaiserring from the city of goslar, germany, and was awarded the public art network annual award by americans for the arts in 2004. she lives and works in hoosick, new york.
.
.
.
.
.
.
.
source: arthistoryarchive

An American Neo-Conceptualist artist, Jenny Holzer (born 1950) utilized the homogeneous rhetoric of modern information systems in order to address the politics of discourse. In 1989 she became the first female artist chosen to represent the United States at Italy’s Venice Biennale.

Jenny Holzer was born July 29, 1950, in Gallipolis, Ohio, into a family of two generations of Ford auto dealers. She completed her undergraduate degree at Ohio University in Athens after attending Duke University and the University of Chicago. While enrolled in the Rhode Island School of Design, Holzer experimented with an abstract painting style influenced by the color field painters Mark Rothko and Morris Louis. In 1976 she moved to Manhattan, participating in the Whitney Museum’s independent study program.

Holzer’s conception of language as art, in which semantics developed into her aesthetic, began to emerge in New York. The Whitney program included an extensive reading list incorporating Western and Eastern literature and philosophy. Holzer felt the writings could be simplified to phrases everyone could understand. She called these summaries her “Truisms” (1978), which she printed anonymously in black italic script on white paper and wheat-pasted to building facades, signs, and telephone booths in lower Manhattan. Arranged in alphabetical order and comprised of short sentences, her “Truisms” inspired pedestrians to scribble messages on the posters and make verbal comments. Holzer would stand and listen to the dialogues invoked by her words.

The participatory effect and the underground format were vital components of Holzer’s “Truisms” and of her second series, the “Inflammatory Essays,” which laconically articulated Holzer’s concerns and anxieties about contemporary society. Holzer printed the “Essays” in alphabetical order, first on small posters and then as a manuscript entitled The Black Book (1979). Until the late 1980s, Holzer refused to produce them in any non-underground formats because of their militant nature. Her declarative language assumed particular force and violence in the multiple viewpoints of the “Essays,” ranging from extreme leftist to rightist.

Holzer initiated the “Living Series” in 1981, which she printed on aluminum and bronze plaques, the presentation format used by medical and government buildings. “Living” addressed the necessities of daily life: eating, breathing, sleeping, and human relationships. Her bland, short instructions were accompanied with paintings by the American artist Peter Nadin, whose portraits of men and women attached to metal posts further articulated the emptiness of both life and message in the information age.

The medium of modern computer systems became an important component in Holzer’s work in 1982, when nine of her “Truisms” flashed at forty-second intervals on the giant Spectacolor electronic signboard in Times Square. Sponsored by the Public Arts Fund program, the use of the L.E.D. (light emitting diode) machine allowed Holzer to reach a larger audience. By combining a knowledge of semantics with modern advertising technologies, Holzer established herself as a descendant of the conceptualist and Pop Art movements. She again utilized the electronic signboard with her “Survival Series” (1983-1985), in which she adopted a more personal and urgent stance. The realities of everyday living, the dangers, and the underlying horrors were major themes. Correlating with the immediacy of the messages, Holzer adopted a slightly less authoritarian voice. Her populist appropriation of contemporary “newsspeak” crossed the realm between visual art and poetry and carried a potent expressive force.

Her attempt to make sense out of contemporary life within a technological framework also suggests the limitations of the information age, in which the world of advertising consumes everything, yet an underlying message no longer exists.

After the “Survival Series,” Holzer’s installations became more monumental in scale and more quasi-religious. Her “Under a Rock” exhibition combined the modern media of the communications industry, the electronic signboard, with marble benches printed in the block letters used in national cemeteries. The language measured angst and violence with the apathetic reportage of the most seasoned news personae: CRACK THE PELVIS SO SHE LIES RIGHT, THIS IS A MISTAKE. WHEN SHE DIES YOU CANNOT REPEAT THE ACT, etc. The vivid juxtaposition between horrifying subject matter and the authoritarian voice, coupled with flashing diodes and cold marble, jars the spectator with its apparent paradox and brutal insistency. By utilizing the pronoun “she,” Holzer allied the victimization with the female. The new urgency of the “voice” in Holzer’s “Under a Rock” installation, first exhibited in 1986 at the Barbara Gladstone Gallery in New York, revealed a Holzer more overtly building images that suggest male power and control over women.

The birth of her first child in 1989 inspired Holzer’s “Laments,” perhaps the most personal and angst-ridden series she had done. The “Laments” address motherhood, violation, pain, torture, and death in the voices of “thirteen assorted dead people” (J. Holzer). The personae range in sex and age, yet a common insistency permeates their disembodied words. One passage suggests infanticide: IF THE PROCESS STARTS I WILL KILL THIS BABY A GOOD WAY. The contradictions inherent to the rhetoric, “to kill” but in “a good way,” shape the negations and arbitrariness of contemporary linguistics. Holzer accessed the language structure and media of contemporary politics and advertising in order to reveal the tensions and male domination apparent in the contemporary linguistic system.

The multimedia extravaganzas of Holzer’s later installations, such as the 1989 Guggenheim exhibition, are exemplified by a 535-foot running electronic signboard spiraled around the core of Frank Lloyd Wright’s architecture, flashing garish lights on the monumental stone benches arranged in a large circle on the floor below. In 1989 also, she became the first female artist chosen to represent the United States at the Venice Biennale, the international art world’s premiere event. For the Biennale, Holzer designed posters, hats, and t-shirts to be sold in the streets of Venice, while her L.E.D. signboards and marble benches occupied the solemn and austere exhibition space. Her words were translated into multiple languages in order to communicate to an international audience. Despite the fact that she had won the prestigious Golden Lion award at the Biennale, Holzer also started to draw more negative reactions to her work. The size and expense of her exhibits, as well as her growing popularity in the art world, led some to accuse her of becoming elitist.

Holzer withdrew from the art world for a few years and then returned in 1993 with a fresh approach to her work and a new emphasis on the immaterial. In October of 1993 she partook in a virtual reality exhibit at the Guggenheim Museum. The following year she produced her next series, “Lustmord,” which opened at the Barbara Gladstone Gallery in New York. The title is taken from a German word that means murder plus sexual pleasure. She was inspired by the violence of the war in Bosnia, formerly a republic of Yugoslavia. In 1996 she participated in the First Biennale of Florence. By accepting multivalent formats for her media-conscious verbal imagery, Holzer created a populist art of expressive and poetic force.
.
.
.
.
.
.
.
.
source: monitoriablogartblogspot

Jenny Holzer (b. 1950) is an internationally renowned artist best known for her pioneering work incorporating texts into light-based sculptures and projections. For SAAM (2007) is Holzer’s first cylindrical column of light and text created from white electronic LEDs (light emitting diodes). The piece, according to the artist, is “sensitive to the formal integrity of the museum and attuned to the experience of the collection and space.”

The sculpture, which is approximately twenty-eight feet tall and four feet in diameter, features texts from four of the artist’s series—Truisms, Living (selections), Survival (selections), and Arno—and includes some of her best-known statements. The texts are programmed to swirl and travel around the body of the piece. By varying the height, font, intensity and direction of the scrolling letters, Holzer activates the transparent column and the surrounding space with light that reflects off surfaces in the gallery.

For SAAM is the latest work that is part of Holzer’s ongoing exploration of art and architecture. She has created site-specific work for the Guggenheim Museum in Bilbao, Spain, the Reichstag in Berlin, and 7 World Trade Center in New York City, among others.