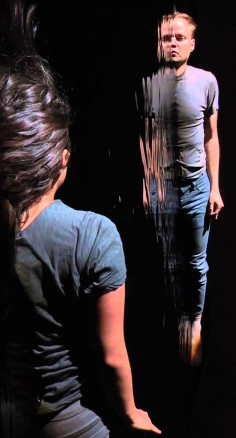 In 2007 my partner, the writer Ingrid Rojas Contreras, was struck by a car on the way to pick up her wedding dress, three days before our wedding. She suffered a concussion and temporary amnesia. This incident became the inspiration for our collaborative work Other Half Orbit.

The installation consists of a large reflecting pool with built-in topographies to hold our bodies horizontally at exactly half-submersion. The images of our bodies become completed by reflection, and a secondary reflection of our shadows is cast on the wall. In the performance, we host an unscripted conversation about Ingrid’s memory loss, dreams, identity, and the possibility that we may never know one another fully.
.
.
.
.
.
.
.
source: soexorg

In 2007, Rojas Contreras briefly lost her memory in an accident, an event that inspires questions about self, identity and personal history in this performance. For Other Half Orbit, the two performers lay half-submerged in a wide pool of water, the images of their bodies completed by their reflections, speaking of half-remembered moments, dreams and memory loss; the sound of their voices passes through both water and air.
.
.
.
.
.
.
.
source: hyperallergic

This impossibility of fully attaining mastery or complete knowledge of history or the body is a theme explored throughout Barber’s performance pieces, drawings, and sculptures, which were smartly selected for presentation by curator Mazinani. Of these works, most compelling are his three new sculptures titled “Speculative Machine,” “Speculation Sequence,” and “Bring To Mind” that give physical form to sketches of unrealized performance pieces. The sculptures are made from found objects and twine, wood, and metal to tantalizingly hint at what a live body could do if only one could push it just a little further. “Bring to Mind” appears to defy logic through a clever application of tension: are we witnessing an unraveling of twine by a chair, or are we seeing the twine holding up the chair, keeping it from falling down? I believe that this indeterminacy — or our inability to know whether the relationship between materials is actually generative or destructive — characterizes most of Barber’s solo work.
.
.
.
.
.
.
.
source: panhandlermagazine
I am a visual artist based in San Francisco, California using sculpture, video and performance to explore the borders and boundaries of the body. Each performance is a singular experiment. Can I cast a cloud of smoke in the shape of my head? How long can I drag my lover through the desert? Themes of perseverance and body decay are born from my earliest memories—raised in a devoutly religious household, the body and time were merely stepping stones toward a bodiless and timeless afterlife. My artwork is a palimpsest drawn from scientific studies of outré brain phenomena, personal mythologies, Native American literature, and mystical poetry. The artifacts of my performances are thus charged by polarity: the objectivity of the photograph paired with materials handled and worn, errata of a body passing through time and dissipating.
.
.
.
.
.
.
.
source: eventsstanfordedu

It is no coincidence that performance art is in revival–the proliferation of cameras in public has turned every action into a performance. But the story produced by the photograph is never as simple as it appears. Visual artist Jeremiah Barber will discuss his unique history of documenting actions in film, video, and disposable media, focusing on the ways in which documentation can manipulate one’s experience, and how experience can overwhelm the document.

Jeremiah Barber is a visual artist based in San Francisco, California. He completed an MFA in Art Practice at Stanford University and a BFA at Columbia College, Chicago. A former member of Marina Abramovic’s Independent Performance Group, his work has been exhibited at the Museum of Contemporary Art, Chicago, and the Chicago Cultural Center. This summer he completed a residency at Cité Internationale des Arts in Paris, and is a recent recipient of a grant from the Foundation for Contemporary Arts. Working in public spaces at times for an audience of none, his work explores themes of toil, transcendence and the illusive human spirit.
.
.
.
.
.
.
.
source: rootdivisionorg

Jeremiah Barber is a visual and performance artist based in San Francisco, California. He completed an MFA in art practice at Stanford University and a BFA at Columbia College, Chicago. A former member of Marina Abramovic’s Independent Performance Group, his work has been exhibited at the Museum of Contemporary Art, Chicago, and the Chicago Cultural Center. Working in public spaces at times for an audience of none, his work explores themes of toil, transcendence and the illusive human spirit.