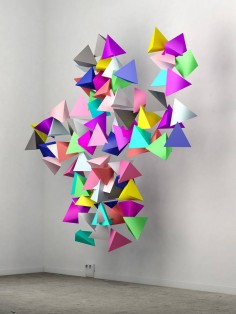 Jeremy Bailey is a Toronto-based new media artist whose work explores custom software in a performative context. Over the last decade Bailey has exhibited and performed at a range of international festivals and venues including the 2010 01SJ Biennial, HTTP Gallery, Subtle Technologies and in 2001 he co-founded the (now defunct) 640 480 Video Collective.
.
.
.
.
.
.
.
.
source: schirn-magazinde

Over the past few years, I’ve enjoyed watching Bailey’s augmented-reality YouTube videos as an escape from the über-seriousness of the art world.

In the absurd digital scenarios Bailey creates for his naive and narcissistic persona—changing the settings on a stock portfolio by dancing to a pop song; creating a new land mass by nodding his head; turning his face into an interactive TV set—the downcap-a artist demonstrates a simultaneous mastery and contempt of technology and its touted ability to solve our problems.

The tensions in Bailey’s videos—between expertise and amateurishness, man and machine, self-aggrandizement and self-deprecation—often collapse into satire (Bailey’s) and laughter (the viewer’s).

And so, it was with great expectations that I headed to Bailey’s recent exhibition at Toronto’s Pari Nadimi Gallery—and encouraged others to as well.

In that exhibition, Bailey did a worthy artistic thing: he took a risk. In his case, the risk involved heading into a more collaborative, social and object-oriented zone than the silly solo-performance-for-laptop videos I’ve loved to watch.

Unfortunately, as with any kind of change, it’s possible that Bailey’s new strategy hasn’t yet caught up with the proficiencies of his past work.