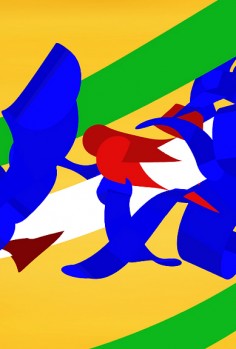 BECHA-KPACHA is an algorithmic music video for the electronic musician COH. The song’s tittle (pronounced Vesna Krasna) was taken from an old Russian poem and roughly translates “Spring the beautiful”, though it can also mean “Spring the red.”

The animation reference’s traditional Russian folk patterns, commonly known as Hohloma. In these patterns, colorful plant leaves expand and twist around one another while fruit grows along side. These patterns were a starting point for this sound-responsive animation.

BECHA-KPACHA is one of a handful of videos that accompany the release of his album “To Beat” on Editions Mego. Other videos, by Julieta Triangular, Mariann Lois-Iron and Paul Prudence can be found on COH’s Vimeo channel.
.
.
.
.
.
.
.
source: cermade

Je­remy Rot­sz­tain is a dig­i­tal artist who looks at the his­tory and prac­tice of paint­ing through a dig­i­tal lens.
Employing “gestures” that are common in this digital era — swiping a finger across an iPhone’s screen or remixing clips from Hollywood films — he creates animated compositions with a painterly aesthetic. Audiences are invited to explore and disappear into screen based-canvases, which are virtual windows onto endless 3D worlds.