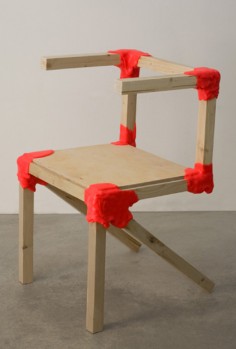 This wooden chair by Berlin designer Jerszy Seymour is held together with blobs of wax. Update: this project is included in Dezeen Book of Ideas, which is on sale now for £12.

Called The Workshop Chair, the piece is a product of Seymour’s conceptual series of work entitled Amateur.

Seymour creates environments and events such as dinners using wax as a metaphor for ubiquitous creative ability.

The Workshop Chair is made of wooden batons joined with polycaprolactone wax.
.
.
.
.
.
.
.
source: mydecor

Jerszy Seymour is a designer working in the most expanded sense of the field. He sees design as the creation of situations, as the general relationship we have with the built world, the natural world, other people and ourselves, and as much about the inhabitation of the planet as the inhabitation of the mind. The goal is the transformation of reality guided by constant humour and a tainted sense of poetry and the idea of the NON-GESAMT GESAMTKUNSTWERK.
His work spans from playing with the industrial and post-industrial produced object, actions, interventions and installations, covering a range of mediums and materials, objects, film, performance, music and writing.

He was born in Berlin in 1968 to a Canadian mother and German father who were both ballet dancers. He grew up in London during the eclectic roller coaster of the eighties, where he studied at South Bank Polytechnic (1987 – 1990) and industrial design at the Royal College of Art (1991 – 1993). Shortly after this he moved to Milan and started his own indepenent projects, including ‘House in a Box’ in 2002, ‘Scum’ in 2003, and the clothing concept ‘Tape’ in 2003. In 2004, Seymour moved to Berlin where he formed the Jerszy Seymour Design Workshop and embarked upon a series of conceptual projects seeking to revitalize the position of design within society. In 2005 he created the ‘Brussels Brain’ installation, (Design Brussels), and, in 2007, the exhibition ‘Living Systems’ (Vitra Design Museum) to investigate the individual economy. In 2008 the installation ‘The First Supper’ (MAK, Vienna) proposed the possibility of an ‘amateur’ society; this was followed by ‘Salon des Amateurs’ (Marta Herford, 2009) and the ‘Coalition of Amateurs’ (MUDAM, Luxembourg, 2009). He was also invited to show a retrospective of his work at Villa Noailles (France), creating the exhibition ‘Being There’. These and other ongoing experimental and conceptual projects form the central thrust of his work. Parallel to this he also designed products and strategies for companies including Magis, Vitra, Alessi. Seymour is represented by CRONE Gallerie in Berlin and Gallery Kreo in Paris. His work has been exhibited in many museums worldwide, including the Design Museum in London, the Vitra Design Museum in Basel and Berlin and the Palais de Tokyo. His work can be found in the permanent collections of the Museum of Modern Art, New York, the ‘Fonds National d’ Art Contemporain’ France, the Centre Pompidou, Paris, the MAK in Vienna and the ´Musee d´Art Grand-Duc Jean´ in Luxembourg. As an integral part of the philosophy of the Workshop, he teaches and gives workshops at the Royal College of Art in London, the Domus Academy in Milan, the ECAL in Lausanne, the HfG in Karlsruhe, HBK Saarbrucken, the Vitra Design Workshops in France, UdK in Berlin, and the Strelka Institute, Moscow.  In 2000 he was presented with the Dedalus Award for European Design and he received the Taro Okamoto Memorial Award for Contemporary Art in 2003. As a realization of the Amateur projects, Jerszy Seymour created 2011 the program and is director of ‘The Dirty Art Department’, the new Applied Art and Design Masters at the Sandberg Institute/Reitveld Academy in Amsterdam together with Catherine Geel, Stephane Barbier Bouvet, and Clemence Seilles.
His first solo exhibition “The Universe Wants To Play” at Gallerie CRONE in Berlin was openned in April 2013.