March of the Valedictorians 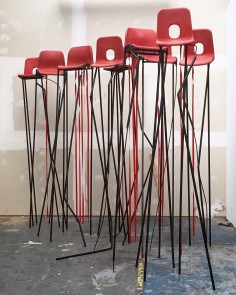 source: bravenewwhat
Jesse Darling is an artist and writer whose practice, while dispersed beyond that of conventional critical art, centres around a critique of the prosuming performative self produced by late capitalism. Her work steers away from a formalist appropriation of this discourse and instead explores, sometimes in a celebratory way, the mediative forms of this post-Fordist, IKEA-furnished, playbouring phase of user-generated capitalism.  After her solo exhibition Stockholm Syndrome and Other System Failures (March 2012) at Arcadia_Missa, co-directors Tom Clark and Rózsa Farkas spoke to Darling to explore some unresolved questions raised by the show.
.
.
.
.
.
.
.
source: frieze
For Habeas Corpus Ad Subjiciendum (2012), London-based artist Jesse Darling stands mute in the beam of a projector. A silent PowerPoint presentation flashes up text and images of the artist’s tweets and online posts, and directly addresses the audience with facts, questions and instructions. Titled after the medieval legal writ that requires the presence in court of a prisoner who is to be tried, Darling’s response to the occupational hazard of the ‘artist talk’ offers up a flesh-and-bones body whose voice has been flattened into Microsoft Office standard slides. The presentation pre-empts predictable questions about the artist’s biography with a hint of dramatic intrigue. One tweet reads: ‘Everyone knows that Darling is an end-of-the-line monstrous war-cry kinda pseudonym, taken in defiance of a world that doesn’t love you.’ Later, it affects a sincere, academic tone: ‘I talk about performance because it acknowledges the contingency, the temporality, the artifice. I talk about performance but really I mean passing.’ Eventually, the pretence of the lecture collapses with a slide announcing: ‘I’m not a performance artist, I just play one for money.’

Darling’s online presence is a mixture of aphoristic tweets, theory-driven commentary, personal anecdotes and sophisticated language games posted on social media including Twitter, Facebook, Instagram and Tumblr. If you sought to distinguish an art practice ‘proper’ from this online activity, it would include a number of videos such as Darling’s Room (2014), a music video covering the 2011 song Marvins Room, Canadian rapper Drake’s dirge for drunken masculine vulnerability. Darling, in drag, stands in for Drake and replaces his original rap clichés with art world-themed lyrics peppered with Twitter acronyms. While undoing the illusion of virility performed by famous men, this work also alludes to Darling’s real-life explorations in gender identity, as a person who was assigned female at birth and currently identifies as transmasculine. Commissioned by Brian Droitcour for the online platform DIS Magazine, the video was widely shared on social media.

The collectivity evident in Darling’s digital output – groups of friends appearing in videos, active conversations on social media – is intrinsically related to a commitment to exploring the role collaborative living can have on artistic practice. This interest saw Darling found the Kitson Road Living Project in south-east London, a home for artists and a space for art events that operated from early 2013 to July 2014, when it moved nearby and became the Fernholme Road Living Project. A politics of sharing pervades much of Darling’s work, exemplified in a ‘drawing practice’ of stick-and-poke tattoos given to friends and collaborators, including one of a woolly mammoth, made on the occasion of the ‘Extinction Marathon’ at London’s Serpentine Gallery in October 2014. The recipient of the tattoo brings an idea to Darling and talks through its significance; the artist then sketches a pictorial interpretation onto his or her skin before rendering it as a permanent ink drawing – the corporeal memento of a shared event.

These various activities underpin Darling’s sculptural work, which can be seen as a more classical formal means of expression. Last winter, ‘Spirit Level’ – Darling’s second show of work made with the artist Takeshi Shiomitsu – was presented at ANDOR gallery in London. The intimation of damaged bodies and various cures pervaded the show: sculptures were made of broken or sawn plasterboard and wood stuck together with expanding foam, alongside heat-sealed, clear-plastic envelopes containing medicines, foods and toiletries attached to the wall with tape printed with the word ‘CERTAIN’, in the style of ‘FRAGILE’ tape. Larger sculptures incorporated tourniquets, pink ribbon, butchers’ hooks and punch bags, with leaking water containers and various items bandaged with the tape.

‘Material Girls and their Muses’ (2014), an exhibition organized by Marcelle Joseph Projects in a derelict office in London’s Clerkenwell neighbourhood, featured Darling’s ‘loser militia’, a motley crew of figurative sculptures. The works loitered about, leaning against walls or hanging from the ceiling. Some radiated an eccentric disfunctionality, while others suggested a deflated heroism. Made from steel tubing, elastic, rope and Darling’s singular material of supermarket shopping bags sculpted using the flame of a plumber’s brazing torch, they exuded a droll and anguished energy.

The gathering centred on Masc Irade (2014), a tall, sketchy figure strung up on blue bungee cord. A steel yoke bent into a wide zigzag reminiscent of clavicles and shoulders acted like a clothes hanger for a torso made of sculpted shopping bags. Resembling a flimsy white vest bearing the slogan ‘Top Brands’, the body was pulled taut by a metal lower half precariously balanced on pram wheels. It’s a sculpture on the verge of a comic or vicious spasm – part slapstick, part slap-in-the-face. The forces of seduction and violence seem to reside just under the skin of many of Darling’s works, which please, fascinate and revolt in equal measure. The legless Our Lady of Whatever (2014) comprises a pink hourglass body made of shrivelled translucent plastic. She hovers in space, her carapace winding down to where the heat-sculpted plastic puckers around a sizeable hole suggesting a mixed-use genital-anal opening. Material Girl (2014), a headless sculpture whose hybrid animal/human form would have felt at home in Hieronymus Bosch’s Garden of Earthly Delights (1503– 04), recalls raw poultry. It hung from a pair of butchers’ hooks attached to a squat metal structure with knock knees and splayed feet, its ‘body’ a sheath of orange plastic like a grotesque version of a couture dress.

Throughout Darling’s work, a single, distinctive gesture recurs time and again: the penetration of natural or cultural barriers, performed either by poking a needle through skin, cutting through the froth of online babble or burning through a disposable plastic membrane. For Darling, ‘social media is an outreach platform, a self-selecting community aggregator.’ He explains: ‘I’m trying to bring together these aspects of my practice in the public eye so that they need not feel so compartmentalized nor give any extra weight to the silly hypothesis, still very prevalent in art discourses, that there is anything like a “digital divide” [irl/url]’.