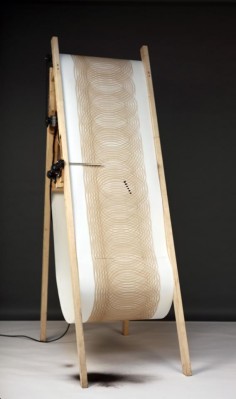 Over the past several years Oakland-based artist Jesse Houlding has created a variety of incredible kinetic drawing devices using magnets and iron fillings. As a series of magnetic components move in various patterns behind the paper, the iron fillings leave a gradual residue that reveals a visual representation of the magnetic field holding them in place. Houlding says that he is interested in the accumulation of marks, specifically how time is evidenced in artwork and the relationship between process and end-results. You can see a couple more videos of his machines on his Youtube channel.
.
.
.
.
.
.
.
source: prostheticknowledgesoupio

The Loop Drawing Machine is a kinetic sculpture that uses magnets and iron filings to draw on paper. The friction of the iron on the paper both makes marks on the paper and pulls the paper through the machine; drawing a loop on a loop of paper. A chamber and auto-feed replenishes the iron as the magnets revolve past the feeder. Eventually the paper becomes a completely darkened by the overlapping marks.
.
.
.
.
.
.
.
source: houlding

My work consists of installations that use light and other natural phenomenon to explore perception and the construction of meaning. By creating a relationship between the visible and the invisible, I explore the boundary between the known and the unknown.

Evoking the night sky or the deep ocean, I am inspired by realms that are difficult to penetrate and create a feeling of awe and fear. I hope to express the inherent conflict in our relationship with the unknown. Like the tension of a lighthouse’s beam sweeping across the night, blurring reality with the creations of our imagination, my intention is to capture the mixture of anxiety and curiosity that comes with not knowing, of not being able to trust your eyes.
.
.
.
.
.
.
.
.
source: inthemake

I’ll admit it— Jesse’s work initially made me nervous. With titles like “The Telluric Currents” I worried I’d need to brush up on my scant knowledge of geophysics before our studio visit and that if I didn’t, I’d be completely lost. In reading about his work, I kept coming across the words kinetic, magnetism, and machines and all I could think was, Uh-oh…this is gonna be a tough one. I’ve never exactly been an ace in the field of science, so despite doing research I still felt a rising panic on our way to his Dogpatch studio. Mostly, I was concerned that Jesse would embark on lengthy explanations full of abstruse language and I’d be left totally dumbfounded.

As soon as I shook Jesse’s hand all my worry dissipated. He pretty much radiates a regular guy vibe; down-to-earth, cheerful, and eager to engage with questions about his work, he carries no pretense. When we talked about “The Magnetic Drawing Machines”— his series of kinetic sculptures in which magnets “draw” on paper by pulling iron filings across it— he kept his language simple and accessible. The mechanics of the sculptures are actually quite straightforward and in person they present an unfussy but mesmerizing visual experience. The same is true of Jesse’s “Truck Drawings” which are created in the back of his pickup truck using a 16-pound heavy metal shot put ball. Essentially, as Jesse drives the ball rolls around a piece of carbon paper in the truck bed and makes a map of the journey.

Jesse’s work is rigorous but whimsical; led by his curiosity and guided by the principles of the scientific method, he brings it to life with a tinkerer’s dexterous touch. He’s aware that his work is potentially challenging to viewers and he also knows sometimes people get stuck on the technical aspect of it. But his aim is create wonder around both what is readily visible and also what is unseen— he wants the marvel of mechanics to hint at the natural phenomena at play, thereby engaging his viewer in newfound perceptions.