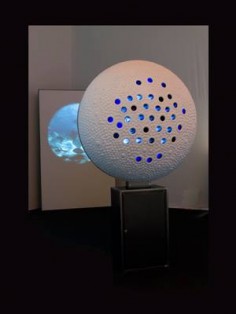 The Electric Retina is a “neuromedia” sculpture which combines retinal research with interactive media art and metaphorical associations in order to explore the complexity of visual perception. Based on her residency in Neurobiology at the Institute of Zoology, University of Zurich, Scott gained a deeper insight into the genetic control of visual system development and function by analysis of zebra fish mutants, which are used as the main phenotypes for human eye disease research. While the Electric Retina displays examples from some of this research at the lab, its surface is constructed according to the rod and cone pattern array of photoreceptors in the human retina inspired directly from the Scanning Electronic Microscope. When the viewer looks into the “cones” or oculars, animations appear about the histological evidence, behaviour tests, molecular staining, cellular research images and related keywords from the researchers. The issues covered are macular degeneration, human diseases of the eye, genetic deficiencies and polarization. It is as if the viewers are looking through the tunnels into the neural chemical layers of the eye. From the other side of the sculpture, films of underwater movies are projected onto the wall. These are shot from the perspective of the impaired subject, which shows how visual impairment can affect neural behaviour. Therefore the projected films (affect) are directly related to the content of these ocular films (evidence) and aim is to allow the general public to gain a better understanding of how vision is affected by genetics, disease and degeneration.

The media artist Jill Scott has created the neuromedia sculpture “The Electric Retina” during her residency at the Neuroscience Lab University Zurich, Switzerland. The Artists-in-Labs program offers 4 annual residencies in Swiss science labs to artists. Scott initiated the program and is its director. Currently the docu is also shown in Singapore at the ISEA, an electronic arts festival. The film maker Anet Nyffeler directed this docu and currently develops a TV-documentary on the subject ArtSci and this specific program. Transdisciplinarity is a current overall development in the arts and science.

“True knowledge exists in knowing that you know nothing!” -Socrates Conceptual art requires a subjective approach and the process of discovery is often evident in the final artwork that is produced. The aim of Neuromedia is to explore how conceptual art interpretations and scientific illustrations of the human body can be combined to transfer information about how we think and how our senses work together. While Scott makes unique screen based sculptures embedded with macroscopic views of molecular and cellular evidence, over the last few years, the increasingly popular subject of Neuroscience offers many artists a reality that is now considered to be an “extension of cinema”. After all, perceptual feedback loops are at the heart of both disciplines, a fact that is causing more collaboration between artists and neuroscientists to occur. What is the value of these collaborations? Are the results are objective and subjective at the same time? Under the headings of “inspirations, constructions, challenges and reactions” can Neuromedia not only humanize science but also deepen the tangible and experiential experience of art itself?

BIOGRAPHY Jill Scott is originally from Australia, but has been working and living in Switzerland since 2003. Currently she is a Professor for Art and Science in the Institute Cultural Studies in the Arts, at the Zurich University of the Arts (ZhdK) in Zürich and Co-Director and Founder of the Artists-in-Labs Program (a collaboration with the Ministry for Culture, Switzerland) which places artists from all disciplines into physics, computer, engineering and life science labs to learn about scientific research and make creative interpretations. She is also Vice Director of the Z-Node PHD program on art and science at the University of Plymouth, UK-a program with 16 international research candidates. Her recent publications include: The Transdiscourse book series: Volume 1: Mediated Environments, 2011, Artists-in-labs: Networking in the Margins, 2011 and Artists-in-labs: Processes of Inquiry: 2006 Springer/Vienna/New York, Artists-in-labs Processes of Inquiry both from Springer/Vienna/New York. Her education includes: PhD, University of Wales (UK), MA USF, San Francisco, as well as a Degree in Education (Univ. Melbourne) and a Degree in Art and Design (Victoria College of the Arts). Since 1975, she has exhibited many video artworks, conceptual performances and interactive environments in USA, Japan, Australia and Europe. A monograph entitled: Coded Characters Hatje Cantz 2002, Ed. Her most recent art works involve the construction of interactive media and electronic sculptures based on studies she has conducted in residence in neuroscience labs at the University of Zurich, called “Neuromedia” (a Springer Publication in conjunction with an exhibition of the same name in KULTURAMA Science Musuem in Zurich). These particularly relate to the somatic sensory system and artificial skin (e-skin) 2003-2007, molecular and retinal behaviour in relation to human eye disease (The Electric Retina-2008), nerve damage in relation to UV radiation, in the skin and on the landscape (Dermaland- 2009) and Somabook (2010) about the problems in the development of neural networks in the pre-natal stage. Currently, she is working on two new projects about the neural systems of hearing and taste, inspired by a residency with neuroscientists at SymbioticA, University of Western Australia.