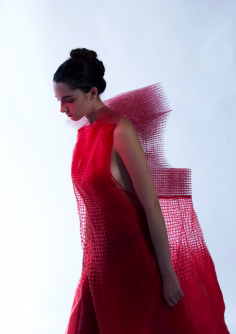 Post-graduation, Jim looks back positively at his Central Saint Martins experience, as it provided more freedom and allowance to develop his individual voice, as compared to his native Taiwan. Yet, he admits to be longing for even more space for individual expression: “I wish there had been more options in terms of projects. Not everyone is going to fit the same brief. It’s easy to feel a bit surpressed.” He confesses that his degree was a primarily individualistic experience, in which he could push his sculptural innovations and design aesthetic to the maximum.

Jim has received an impressive amount of attention for his graduation project, yet he is hesitant about heading on to found his own label. “It’s a question I ask myself as well,” he says of the future, as he is currently working on several plans and projects. “It could be within a company, although I’m not sure which company would fit. It could be my own brand, inside the academy, or something completely different.” No matter the path, be sure to hear more from Jim Chen-Hsiang Hu.
.
.
.
.
.
.
.
source: metavortexwordpress

If 2014 was the year of the 3D-printed whatever, maybe 2015 will be the year of hybridizing 3D printing with traditional modes of manufacturing and production. Jim Chen-Hsiang Hu, a graduate of Central St. Martins College of Art and Design in London who recently started his own practice, could represent this new wave, combining speed, efficiency, and material novelty associated with 3D-printing technology with time-honored craftsmanship.

For Hu, that means 3D-weaving, a process that involves taking specially-designed panels of 3D-printed fabric and stitching them together with a variety of traditional techniques to make entire outfits that envelop his models in varying degrees of techno-futurism.

His award-winning project, XI (系), developed while he was a student, aims to question the underlying assumptions we might have about technology and fabrication. 3D weaving allows for there to be a structural grain within the resulting fabric, as opposed to the brittle layered conditions inherent to standard 3D printing. Because of this underlying strength, it produces a material that has wider applications than typically 3D-printed ones.

Hu currently applies his techniques to the realm of fashion, but does not necessarily see 3D-weaving as being confined so narrowly to that field. He says, “It could have a future that is possibly less associated with fashion… would this be the starting point of super-light architecture?” Appropriately, Hu’s newest venture is called One More Dimension, as he told 1 Granary Magazine in an interview: ”I wanted to introduce one more angle or dimension into design.” He explained, “Visually that appears as a third dimension in the clothes.”

Hu’s pieces reflect that diversity of material, texture, and density. Certain articles are more like traditional dresses, save for one or two projecting woven sculptures, while others use the 3D technique to create large swaths of meshed fabric, simulating exaggerated cowl necks or delicate, lace face masks and veils. These red fabric works play a delicate and deliberate game, alternating between semi-solid and void, fabric and netting, while also blurring the boundaries between surface, front, and back.
.
.
.
.
.
.
.
source: 3dprintofweek