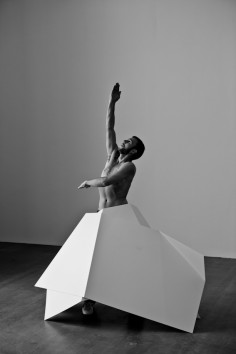 source: tanyaleighton
‘It’s not lame…it’s Lamé’ is the first solo exhibition in Berlin by artist Jimmy Robert. Born in Guadeloupe, Robert was raised and educated in Europe in the 1990s – an era in which questions of citizenship and representation were hotly contested. Rather than creating conspicuously political artworks, Robert takes his cues from cultural figures of the recent past-avant-garde writers, filmmakers, visual artists – who were not only pioneers in their respective art forms but also deft at subtly registering the traumas and effects of their social conditions. Robert’s concern for the body – both personal and political – in addition to his interest in the poetic potential of ephemeral materials unites much of his work, which ranges in media from photography, film, and video to sculpture and collaborative performance.

Robert typically uses photographic portraiture as a starting point for his works on paper, gently breaking down divisions between two and three dimensions, image and object. In some cases Robert uses found photographs that he tears, collages, tapes, and crumples before digitally scanning them and pinning them to the wall. In other cases, Robert takes new photographs in his studio and crams them into wooden boxes or arranges them on the gallery floor. Extending into the space of the gallery, these works create a relationship to the viewer’s body while underscoring a sense of impermanence. Likewise, Robert’s sculptures are either made from wood-based materials or give the illusion of paper forms and often play with notions of value and durability.

Integrated within his photographic and sculpture practice, performance remains an integral part of Robert’s work. The installation ‘Reprise’, for example, demonstrates how objects can also be performative. The work references Canadian artist Jeff Wall’s photograph ‘A Sudden Gust of Wind (after Hokusai)’, 1993, which captures five figures physically responding to a strong wind. The composition in Wall’s work is a recreation of Japanese painter and printmaker Katsushika Hokusai’s (1760-1849) woodcut ‘Ejiri in Suruga Province (Sunshū Ejiri)’, 1830-33. The theatricality in the movement of the figures in both works acts as a point of departure for Robert’s ‘Reprise’. His dance and performance works value gesture and chance over elaborate choreography, referring to Fluxus artists such as Yoko Ono and Yvonne Rainer of the Judson Dance Theater. To recreate ‘Metallica’ for this exhibition, Robert has collaborated with dancer Juan Corres Benito, who is trained in the Forsythe technique; the live performance will occur three times during the course of the preview at 7pm, 8pm, and 9pm.
.
.
.
.
.
.
.
source: davidoffartinitiative
By tracing a lineage from Feminism to Post-Colonialism via notions of affect, appropriation, documentation and language, and the idea of masquerade, we have worked toward constructing a vocabulary that has helped us not only to create new works but develop new ways of working altogether. Performance is a collective practice. Therefore, we would like to expand the collective nature of our work by “exporting” this approach to practice to the school in Altos de Chavón in the Dominican Republic.

Artist Jimmy Robert is a graduate of Goldsmiths College in London. His videos, installations, and ephemeral collages draw on the theatrical language of choreography and contemporary dance, informed by thematic undercurrents of Conceptualism, Feminism and Post-Minimalist sculpture. Beginning with the white page as a state of absolute potential, Robert moves toward the acts of touching and representing while acknowledging their elusive natures.