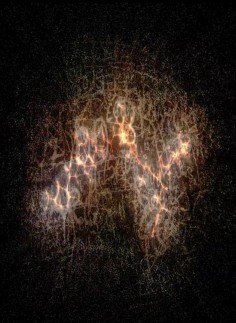 For centuries alchemists searched for the philosophers’ stone, a secret substance not only capable of changing common metals into silver or gold, but also ensuring agelessness, health and even immortality. Today, scientists focus on creating new molecular tools to meet the needs and ambitions of our society.
The scientific project was inspired by the bacterium Delftia acidovorans, discovered in Australia and known for generating a non-ribosomal peptide called Delftibactin used to detoxify soluble gold and to create golden nanoparticles. By experimenting with E-coli bacteria, scientists aim to verify the potentiality of non-ribosomal peptides synthesis not only in recycling gold from electronic waste but also in pharmaceutical and basic research.
The philosophers’ stone may well be perceived as a quintessence of human greed and hubris, but also as an embodiment of eve-lasting human passion to comprehend and govern natural processes. The Intersection of cultural and scientific imageries/imaginaries as well as rich cultural roots of contemporary scientific practices became the inspiration for my artistic work.

Indeed, the philosophers’ stone (Latin: lapis philosophorum) is mostly associated with the legendary alchemic substance used for the transmutation of base metals into precious stones: gold or silver. However, for alchemists, the human greed was not the ground for their research. The Greek alchemist, Zosimos qualified the philosophers’ stone as xerion (Arabic. El Iksir, Latin. Elixir). Apart of transmutation, it was supposed to heal all forms of diseases, prolong life, secure agelessness and even immortality.
In many interpretations, the philosophers’ stone was not a real substance but a metaphor for enlightenment (full comprehension) and knowledge. It is worth to emphasize that lapis philosophorum was not considered as a possession or achievement of a singular scholar but a shared property of those who “love wisdom”.
From its beginning, the search for the philosophers’ stone proceeded on two levels:
exoteric – extraverted (technical/operational) and
esoteric – introverted (contemplative/psychological).
This duality was based on the conviction that meditation and self-reflection requires practice in the real world, and vice versa.
For Carl Jung Magnum Opus became a prototype of individuation, that is the full development of a personality aimed at integrating the human psyche – the self.
My artistic project “PHILOSOPHERS’ STONE” juxtaposes contemporary scientific practice with alchemic phases of Magnum Opus with a particular interest in the philosophers’ stone seen as a metaphor for deeper and consistent knowledge (leading to wisdom), internal transformation and higher ethical values. Multidimensional illusionary space calls to life structures and narratives reflecting and questioning the deepest human emotions and desires.

The 3D stereoscopic narrative is accompanied by a hologram-like animation.

NIGREDO or blackness.
For alchemists,the first step towards lapis philosophorum was Nigredo – blackness. In this phase all ingredients where subjected to putrefaction or decomposition becoming massa confusa. a uniform black essence or chaos.
In analitical psychology Nigredo was interpreted as the state of non-differentiation between self and object, consciousness and the unconscious. It was followed by a growing awareness of the subject’s shadow aspects combined with a painful confrontation, self-criticism, disillusion and powerlessness.
in my film: Nigredo is the process in which computer waste, people and bacteria merge into a unified digital matter.

ALBEDO whiteness, process of purification
in film: process in which particles of massa confusa start to form an atomic structure of Delftibactine, slowly creating a complicated virtual structure

CITRINITAS yellowness; the transmutation of silver into gold, the solar dawn and awakening, in film: the cloudy model of Delftibactin is transformed into a precious and desired gold, a symbol of the highest value, immortality and beauty.

RUBEDO redness, the final stage of magnum opus, standing for the achievement of “wholeness” and the deepest knowledge of nature.
In film the piece of gold, made of data, scientists’ notes and records, slowly gets diffused into particles – dispersed carriers or seeds of information,

the process of achieving Philosophers’ Stone concluded in MULTIPLICATION and PROJECTION (into the world) – aiming to increase the potency of lapis philosophorum.
In film dispersed particles start to form copies of the peptide, stems of philosophers’ stone.

They are developing in virtual Petri dishes, which towards the end, form a symbol of the tree of life.
The tree of life, identified often as a tree of knowledge and an elixir of life, brings together in its diagram values represented by the
philosophers’ stone and a way of development from the roots-foundations through beauty, understanding and knowledge to the crown of wisdom.
Simultaneously it represents a phenomenon of life as an inextricable network of relations; as a whole, in which every part is in the same sense alive.
This interpretation is close to the novel way of understanding the ecology of life and system-thinking within categories of relations, diversity and contexts.

The truth about human condition and its limits is to be found in the non-fullfillment of Magnum Opus; in the impossibility to reach fully the knowledge
and in the illusion accompanied by discovery. But a part of this truth is also a continuing desire to overcome boundaries and to create new structures
of thinking in encompassing massa confusa. Today, at a time of great development of science, information transfer and inter-human communication,
there rises a hope for a possibility to win against the chaos of particularistic aspirations and contexts.
Knowledge sharing is not only the basis for scientific progress, but also the progress of civilisation in general. The question arises if we will be able to
overcome a particularism of thinking in order to achieve ‘a universal knowledge’ which we could use wisely. This question remains open.
.
.
.
.
.
.
.
source: vimeo