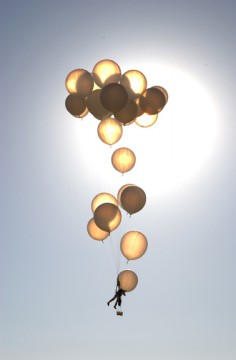 On October 7, 2001, I began my career as a tower jumper. I was following in the footsteps of Eilmer and Reichelt, but I was more pragmatic than they were. I brought a crash mat to allow myself the possibility of multiple flying attempts.

On November 15, 2001, I tried some new flying strategies. I spent much more time before each attempt preparing myself mentally to fly, and I leapt from greater heights than I had previously. A small but deep pond cushioned me after each failure, but I was not comforted. By the end of the day, I could not try anymore. I broke down and cried, as I realized that I could not fly without mechanical assistance.

Blanchard’s drawing made me realize that I wanted to make this dream of combining music and flight actually happen. I wanted to fly with helium balloons, but I wanted music and breath to power this flight. My theory was that breath plus music plus… forty six-foot helium balloons would equal flight. The bagpipe was critical for this equation to work. The bagpipe is the only instrument that I am aware of where you can make music by squeezing a balloon. If the helium balloons rose from horns that came out of the musical balloon of the bagpipe music and flight would be inseparably linked. Maybe this would allow me to combine the physics and metaphysics of flight in the way that ER Brewster tried to do.

I floated in the air for over an hour. I used the valves to maintain a height of 150 feet for much of the flight.

Searching For The Impossible: The Flying Project is a 32 minute film as well as an installation consisting of the film, photographs (including a lightbox of Eilmer The Flying Monk) and the musical flying machine. The project was first exhibited (in its completed form) at Art Center College of Design in 2002, and it has since been shown in many locations, including the Orange County Museum of Art (Newport Beach, CA), the DeAppel Centre for Contemporary Art (Amsterdam), the Anderson-Abruzzo Albuquerque International Balloon Museum, the California Museum of Photography, the Art Gallery of Novia Scotia, Herve Loevenbruck Gallery (Paris), Christine Konig Gallery (Vienna), Susanne Vielmetter LA Projects, and Galerie Adamski (Berlim).
.
.
.
.
.
.
.
source: joeltauber

Joel Tauber is an artist and filmmaker who studied at Art Center College of Design (MFA) and Yale University (BA). Tauber teaches experimental film and orchestrates the video art program at Wake Forest University. His work has been shown in solo art exhibitions at a number of locations, including Galerie Adamski in Berlin as well as Aachen, Germany; the Helen Lindhurst Fine Arts Gallery at the University of Southern California; the Rocky Mountain School of Photography; and Susanne Vielmetter Los Angeles Projects. Tauber’s installation, The Sharing Project, will be presented as a solo art exhibition at the University Art Museum at Cal State Long Beach from June 13 – July 19, 2015. He has been included in numerous group art exhibitions including the 2004 and 2008 California Biennials at the Orange County Museum of Art; “The Gravity in Art” at the De Appel Centre For Contemporary Art in Amsterdam; and “Still Things Fall From the Sky” at the California Museum of Photography. Film Festivals include the Sedona International Film Festival, the San Francisco Documentary Festival, and the Downtown Film Festival – Los Angeles, where his movie, “Sick-Amour”, was awarded “Best Green Film.” Tauber won the 2007 Contemporary Collectors of Orange County Fellowship, the 2007-2008 CalArts / Alpert Ucross Residency Prize for Visual Arts, and a 2015 grant from the Andy Warhol Foundation For The Visual Arts in conjunction with a residency from The Grand Central Art Center. His project “Sick-Amour” was shortlisted for a 2011 International Green Award. Tauber’s work has been featured in numerous media outlets, including National Public Radio, Deutsche Welle / Deutschlandfunk radio, NBC local news, the Ovation Network, Swedish Television, ArtReview Magazine, The Design Magazine, ArtWeek, artUS Magazine, The Pasadena Star News, and The Los Angeles Times.