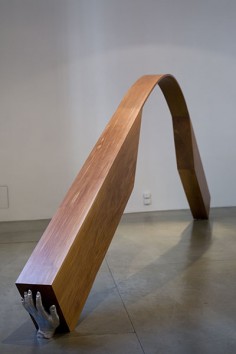 JOHNHOUSHMAND was born an artist in 1954. Raised by a Dutch-American mother and an Iranian father, John has always danced between Eastern philosophy and Western principles. He was cultured at an early age, spending his youth abroad in the Philippines, Great Britain, Iran, and Israel.

Educated at Yale University, John received a BA in Art History in 1978. In the midst, he explored the worlds of professional photography and ceramic arts, featured in gallery exhibits and major publications. Because working with his hands proved a natural extension of his inner vision, John immersed himself in an assortment of artistic realms. He studied under the direction of Erwin Hauer, Professor Emeritus of Sculpture.

He produced and recorded eclectic world jazz albums playing guitar, bass, and percussion. Ultimately, it was his love for nature that led him to begin crafting homes, log chalets and bridges in the Northwest. Having relocated to New York in 1980, John launched a career by co-partnering Clark Construction, a preeminent NYC-based contracting firm.

John’s inventive essence and exceptional life experiences have harmonized to produce his latest masterful creation. His current endeavor involves designing and crafting an exclusive line of functional art, ironically disguised as furniture. John’s work embodies the simplicity of Eastern aesthetics, a vibrant celebration of nature, and a deep reverence for all things esoteric. John is Commander-in-Chief of this entire operation. His unique relationship with the natural world has manifested into an 900-acre farm in upstate New York, which is where he creates his furniture today..
.
.
.
.
.
.
.
source: robinwadefurniture

John Houshmand creates exquisite art pieces that combine wood, glass, acrylic, and steel into stunning furnishings. He works and selectively harvests trees from, as well as mills and kiln dries wood at his 900-acre, upstate New York farm. He believes that trees are becoming lost in our world of mass furniture production. Much like our philosophy at RWF, John strives to show what wood really looks like.
.
.
.
.
.
.
.
source: mtv

John Houshmand is a furniture maker with an atelier in New York’s Catskill Mountains. He has been described as a contemporary designer who uses “massive upended split logs” in the style of George Nakashima. Houshmand’s designs “often juxtapose massive chunks of wood with thick glass panes” and are made by his staff on a 950-acre (3.8 km) farm that is “also home to the company sawmill and the 1,700 slabs he keeps on hand for inspiration.” He has a showroom in Manhattan and travels to meet clients for custom orders on tables. He “has been a photographer, a musician, and a partner in high-end residential construction” and now makes “one-of-a-kind sculptural furniture out of planks, slabs, and even trunks of reclaimed American hardwood like black walnut and elm.”