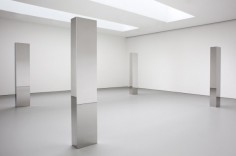 My works are minimal and reduced, but also maximal. I try to make them concise, clear statements in three-dimensional form, and also to take them to a breathtaking level of beauty.
–John McCracken

John McCracken (1934-2011) developed his early sculptural work while studying painting at the California College of Arts and Crafts in Oakland in the late 1950s and early 1960s. While experimenting with increasingly three-dimensional canvases, the artist began to produce objects made with industrial materials, including plywood, sprayed lacquer, and pigmented resin, creating the highly reflective, smooth surfaces that he was to become known for.

Beginning in the 1960s, McCracken exhibited steadily in the United States and abroad, and his early work was included in ground-breaking exhibitions such as Primary Structures at the Jewish Museum, New York (1966), and American Sculpture of the Sixties at the Los Angeles County Museum of Art (1967). In 1986, the major survey Heroic Stance: The Sculpture of John McCracken 1965-1986 was organized by P.S.1 Contemporary Art Center, Long Island City, New York, and traveled to the Newport Harbor Art Museum (now the Orange County Museum of Art), Newport Beach, California; Fine Arts Gallery, University of California, Irvine; and the Contemporary Arts Museum Houston, Texas. In 2011, his work was the subject of a large-scale retrospective at Castello di Rivoli, Turin. Other significant solo shows include the Inverleith House, Royal Botanic Garden Edinburgh (2009); Stedelijk Museum voor Actuele Kunst (S.M.A.K.), Ghent (2004); Hochschule für Angewandte Kunst, Vienna; and the Kunsthalle Basel (both 1995).

In 1997, McCracken joined David Zwirner. Works from 1963-2011 marks the sixth solo show of his work at the gallery, as well as its most comprehensive presentation to date, on view at the West 20th Street location in New York from September 10 to October 19, 2013.

In 2015, the Orange County Museum of Art in Newport Beach, California will host a retrospective of McCracken’s work.
.
.
.
.
.
.
.
.
source: ilikethisartnet

“The geometric forms McCracken employed were typically built from straight lines: cubes, rectangular slabs and rods, stepped or quadrilateral pyramids, post-and-lintel structures and, most memorably, tall planks that lean against the wall. Usually, the form is painted in sprayed lacquer, which does not reveal the artist’s hand. An industrial look is belied by sensuous color.

His palette included bubble-gum pink, lemon yellow, deep sapphire and ebony, usually applied as a monochrome. Sometimes an application of multiple colors marbleizes or runs down the sculpture’s surface, like a molten lava flow. He also made objects of softly stained wood or, in recent years, highly polished bronze and reflective stainless steel.

Embracing formal impurity at a time when purity was highly prized, the works embody perceptual and philosophical conundrums. The colored planks stand on the floor like sculptures; rely on the wall for support like paintings; and, bridging both floor and wall, define architectural space. Their shape is resolutely linear, but the point at which the line assumes the dimensional properties of a shape is indefinable.” – Christopher Knight, L.A. Times.
.
.
.
.
.
.
source: artspycn