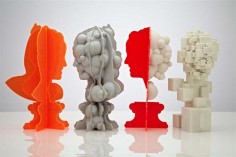 John Rainey presented collection “Insurgency” at the exhibition of graduate projects of the Royal College of Art. A series of hybrid objects that explore the instability of identity in the fusion of real and virtual.

Remember film The Lawnmower Man? Main character Lawrence Angelo would experiment with virtual reality, an immersive system that engages every sense. Real and virtual were two separate worlds, but in the synthetic dimension of the protagonist they blend and gradually erase all humanity and identity.

We’re talking about a movie from the 90s. Virtual reality would develop primarily for videogames, while it’s social networks that would later explode into a full-fledged phenomenon. And simulation would thus take over the territory of human relations. From Facebook onwards, the digital filter to our socialization has spread like wildfire.

So much so that the boundary between real and virtual, public and private, is now very unstable. John Railey’s sculptures set off from this fact and explore how images, their reproduction and our synthetic identity is represented and transmitted in various media.

His series is populated by embryos at a halfway between human and digital, created from photos of a real Facebook profile and later re-elaborated and reproduced on ceramic with high definition 3D printers and machines for rapid prototyping.
.
.
.
.
.
.
.
source: artnectar

Using the entire collection of one person’s photographs from Facebook as a starting point, John Rainey, a student at the Royal College of Art, used Perspex and Z Corp Rapid Prototyping to make interpretive composite 3D print sculptures. For those who don’t know, a Rapid Prototyping printer is a high-definition 3D printer and rapid prototyping machine device that produce physical color models from 3D CAD drawings.
.
.
.
.
.
.
.
source: theverge

Our selves have always been mutable, but technological progress throws the question of who we “really are” into sharp relief. John Rainey’s “Hyper Activity: Scenes from an Other Reality,” showcased at Designboom, plays into both anxiety and fetishization of our strange, cyborg future. The installation’s figures start as photographs, which are then distorted into eerie virtual models and prototyped with a 3D printer before being cast in porcelain. Referred to as “sculptural hyperbodies and prosthetic others,” some evoke human figures stuck in some endless process of transformation, while others are perfectly formed parts of bodies that seem almost more out of place in the surreal landscape.

A description of the exhibit, which is currently showing at London’s Marsden Woo Gallery, suggests that they comment on “our increasing inability to differentiate between reality and its simulations.” But the sculptures can also be read through a different lens: we’re perfectly capable of discerning between different degrees of reality, and we’re coming to accept synthetic spaces and things as being their own curious distillation of it.
.
.
.
.
.
.
.
source: rcaacuk

Having witnessed the gradual collapse of the distinction between reality/fantasy, fact/fiction, privacy/publicity, my sculptures are survivors of a struggle for supremacy between the virtual and the actual. They find their eventual destination within a theatre of artifice, where concrete notions of time and space are destabilised.

In this place, an emphasis on multiplication, exposure and display lead to an edited social consciousness that alters how we configure impressions of both ourselves and others. They are artefacts of a study of the boundaries of representation in a time when synthetic experience and existences prevail, mediated by social media and digital imaging.