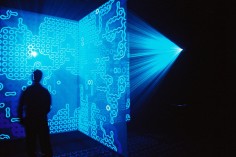 Work: Eden is an interactive, self-generating, artificial ecosystem. A cellular world is populated by collections of evolving virtual creatures. Creatures move about the environment, making and listening to sounds, foraging for food, encountering predators and possibly mating with each other. Over time, creatures evolve to fit their landscape. Eden has four seasons per year and each year lasts 600 eden days. One eden year passes by in about fifteen minutes of real time. Sensors in the space track the movement of people. The longer someone stays, the more food is produced for the virtual creatures around the area where that person is standing. If the work produces sounds that are interesting, people will most likely stay longer. So over time, the creatures lean that by making interesting sequences of sound, they can attract and keep visitors around, increasing their food supply and hence, chances of survival. All the sound you hear is generated by the artwork.
Photographer: Jon McCormack
.
.
.
.
.
.
.
.
.
source: jonmccormackinfo

All the world is watered with the dregs of eden…
Eden is an interactive, self-generating, artificial ecosystem. A cellular world is populated by collections of evolving virtual creatures. These creatures move about their environment, making and listening to sounds, foraging for food, encountering predators and possibly mating with each other. Over time, creatures evolve to fit their landscape. Eden has four seasons per year and each year lasts 600 Eden days. One Eden year passes by in about fifteen minutes of real time. A simple physics dictates only three basic types of matter in the Eden world: rocks, biomass and sonic creatures.

Creatures can learn about their environment, and then pass learnt knowledge on to their offspring. Eden’s creatures begin with little knowledge about the world they are born into. Over time they learn how to find food and potential mates, while avoiding obstacles and predators. They also learn how to make use of sound, since they can make a variety of sounds and hear the sounds made by other creatures in their immediate vicinity.
Not only do creatures adapt to their environment, they modify it, creating complex feedback dependencies between organism and environment, leading to ongoing dynamic change. Over time, many different novel ways of existing are discovered by the system, ways that were never envisaged or planned by its creator. In this sense, contrary to the expectations of Lady Lovelace, the computer has been able to originate something new.

Eden is also an interactive system. A video camera looks down from above the installation and detects the presence and movement of people in the exhibition space. A person’s presence and movement within the exhibition space affects the production of food resources in the virtual Eden world. The longer people stay in the space – indicating their interest in the work – the more food will be produced in the virtual world near the location of the viewer. Over time, creatures learn that by making interesting sequences of sounds, visitors will stay longer in the exhibition space, providing more abundant food resources. This allows the creatures to better survive and reproduce. Even though they have no explicit knowledge of their human audience, the creatures learn that making interesting sounds will lead to a more fertile world for them to live in.
A synergetic relation therefore develops between the human audience and the virtual creatures, linking the real and the virtual in an open-ended, emergent dialogue.
Eden was inspired by time spent in the wilderness of Litchfield National Park, Northern Territory, Australia.
.
.
.
.
.
.
.
.
.
source: jonmccormackinfo

Jon McCormack is an Australian-based electronic media artist and researcher in computing. He holds an Honours degree in Applied Mathematics and Computer Science from Monash University, a Graduate Diploma of Art (Film and Television) from Swinburne University and a PhD in Computer Science from Monash University. He is currently Associate Professor in Computer Science, an ARC Australian Research Fellow and co-director of the Centre for Electronic Media Art (CEMA) at Monash University in Melbourne, Australia. CEMA is an interdisciplinary research centre established to explore new collaborative relationships between computing and the arts. His research interests include generative art and design, evolutionary systems, creativity, visualisation, interaction, machine learning, L-systems and developmental models.
Since the late 1980s McCormack has worked with computer code as a medium for creative expression. Inspired by the complexity and wonder of a diminishing natural world, his work is concerned with electronic “after natures” – alternate forms of artificial life that may one day replace the biological nature lost through human progress and development.
His artworks have been widely exhibited at leading galleries, museums and symposia, including the Museum of Modern Art (New York, USA), Tate Gallery (Liverpool, UK), ACM SIGGRAPH (USA), Prix Ars Electronica (Austria) and the Australian Centre for the Moving Image (Australia). He is the recipient of 16 awards for new media art and computing research including prizes at Ars Electronica (Austria), Images du Futur (Canada), New Voices, New Visions (USA), Alias/Wavefront (USA), The John Lansdown Award for Interactive Media (Europe/UK), Nagoya Biennial (Japan) and the 2012 Eureka Prize for Innovation in Computer Science. The monograph, Impossible Nature: the art of Jon McCormack, was published by the Australian Centre for the Moving Image in 2005 and documents McCormack’s creative achievements over the last 15 years.
.
.
.
.
.
.
.
source: artelectronicsru