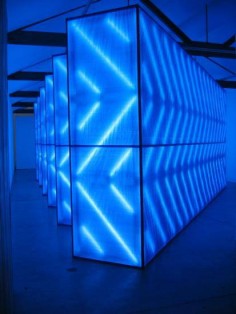 Since completing his study at the University of New South Wales in 1999 Aboriginal artist Jonathan Jones (Kamilaroi / Wiradjuri) has been winning prizes and making waves throughout Australia for his dazzling installations of fluorescent tubes and incandescent bulbs.

Using everyday materials such as electric cabling, household light bulbs and tarpaulin, Jones reveals textural surfaces and dynamic plays of light and shadow that are compellingly beautiful and highly nuanced. Although the cross-hatching and chevron motifs he creates from fluorescent tubes may appear as cool Western minimalism, for Jones they also refer to the traditional Aboriginal concerns of country and community – their designs based upon the carved patterning of Koori (south-eastern Aboriginal) shields and the markings on possum-skin cloaks. For the viewer experiencing the artworks at first hand there is a sense of immersion in both light and heat, as bright lines and dark shadows shimmer and reflect around the gallery walls.

Hetti Perkins, Aboriginal Curator at the Art Gallery of New South Wales, writes that “although the resonance of light suggests the living human presence … so too [Jones’] works serve as a memento mori to those whose past lives continue to light our way”. The overlap with Maori and Polynesian thinking around ancestry and whakapapa is bound to capture the interest of his audience on this side of the Tasman.

In Jonathan Jones’ immersive installation ‘untitled (the tyranny of distance)’, six free standing walls have been covered in blue tarpaulin and glow with filtered light from fluorescent tubes articulated in a continuous chevron design. The chevrons are derived from elements of traditional Koori (South Eastern Aboriginal) line work and resonate with Western minimalism.