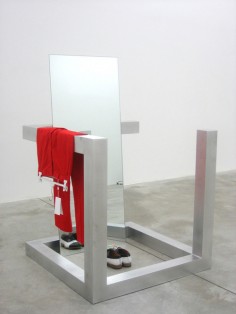 source: guggenheimorg
Jonathan Monk was born in Leicester in 1969. Monk received a BFA from Leicester Polytechnic in 1988 and an MFA from Glasgow School of Art in 1991. In his work, Monk adopts the esthetics and practices of 1960s Conceptualism, but infuses the tradition with humor, levity, and autobiographical elements. In 1992 Monk sold paintings of low-budget travel advertisements for the price of the vacation package itself. In 1994 he mocked the artist’s gesture and persona by writing his name in urine on a beach in. And in 1995 and 1997 he took on the role of a driver awaiting various arriving passengers—Marcel Duchamp, Elizabeth Taylor, Jeff Koons, Kate Moss, Mom—in the Copenhagen airport terminal. While he was living in Los Angeles, Monk created None of the Buildings on Sunset Strip (1997–99) in reaction to Ed Ruscha’s famed photographic artist book. Monk produced two highly personal slide projections; In Search of Gregory Peck (1997) shows found photographs of the artist’s father as a tourist in Europe in the 1950s and The Gap Between My Mother and My Sister (1998) chronicles the trip between the homes of his mother and sister. Monk’s ongoing series Meetings (begun in 1999) proposes future dates and locations as hypothetical invitations to congregate, playing off of the text-based work of Lawrence Weiner and On Kawara. In 2002 Monk passed time as 50 nearly-identical photographs of the artist were developed in 50 different one-hour labs. For the ongoing project Day & Night (begun in 2002), Monk sends postcards to institutions rather than friends or family. For Keep Still (2002–04) the artist places white block letters atop the head of each figure in found group photographs spelling words or phrases like “today,” “a cube,” and “buzz. The slide show Big Ben (2003) projects postcards showing the London monument at the same time of day as the gallery. Monk mocked the display stipulations that often accompany contemporary art as well as the curatorial process in works like This painting should ideally be kept in storage (2004), This painting should ideally be hung near a Sol Lewitt (2004), and This painting should ideally be hung slightly too close to a Douglas Huebler (2005). Monk has created several works in neon; perhaps the best known are several from 2005 which display the hours that the hosting gallery is open to the public, a work that is turned on during opening hours and switched off at closing time. Also in 2005 Monk translated several of the neon innovations of his artistic predecessors into opaque painted aluminum in Corner Piece (for Bruce Nauman) and Corner Piece (for Dan Flavin). In 2009 Monk exhibited five stainless-steel sculptures that offer deflated versions of Jeff Koon’s signature balloon bunny.
Solo exhibitions of his work have been organized by Centre for Contemporary Arts in Glasgow (1992 and 1994), Centre d’Art Contemporain in Neuchatel (1997), Museum Kunst Palast in Dusseldorf (2003), Institute of Contemporary Art in London (2005), Kunstverein Hannover (2006), Palais de Tokyo + Musee d’Art Moderne in Paris (2008), and Artpace in San Antonio (2009). His work has also been included in group exhibitions such as Taipei Biennial (2000), Berlin Biennale (2001), Venice Biennale (2003), Whitney Biennial (2006), Prague Biennale (2007), and Panama Bienniale (2008). Monk lives and works in Berlin.