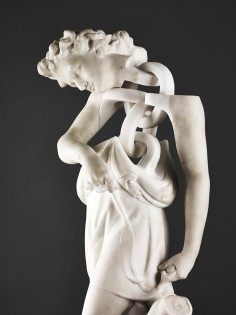 Jonathan Owen’s art is about transformation. Finding photographs that have been reproduced in books, the artist uses an ordinary rubber to erase parts of the image; he does not add anything to the surface of the page. To date Owen has worked on two such series: public statues and Hollywood film stars on set. In early examples he operated in a systematic manner, whereas his more recent works have seen him move in a more intuitive way. Owen knows that the task could easily be accomplished with computer programs like Photoshop®. However, he values the inevitable imperfections that arise when it is done by hand with an ordinary eraser. The residual trace of the figure, which looks like a ghostly apparition, leaves clues as to what was once there.

Owen describes this process of removal as a form of two-dimensional carving. It thus makes sense that his work has evolved three-dimensionally. This began with wooden nutcrackers that Owen intricately altered through carving, first displayed in 2011. These small, captivating sculptures were followed by bold interventions with nineteenth-century marble statues, which he transforms into partially collapsed yet elegant reductions of their original form.

Mercury (2012) shows Owen’s interest in altering the dynamism of the figure. The artist has carved the figure of Mercury’s torso into the form of a chain. The sculpture’s head now slumps forward, as though lamenting. By contrast, in Untitled (2013) the head of a military figure is dramatically distorted, yet the torso remains untouched. The artist has carved the figure’s head into a cage with an intricate three-dimensional star pattern that echoes the medal on his lapel. A moveable marble sphere is trapped inside. In removing the facial features and not titling the work, he focuses attention on the physicality of the sculpture as an object rather than a biographical or allegorical statement. Owen is interested in how figures are immortalised through sculpture and photography and how his own actions question their place in history.

Jonathan Owen (born 1973 in Liverpool) studied Fine Art at Leeds Metropolitan University, graduating in 1996, before obtaining an MFA from Edinburgh College of Art in 2000. Owen began exhibiting with solo shows at the Collective Gallery, Edinburgh, and doggerfisher, Edinburgh (both 2001), and as part of the group show New: Recent Acquisitions of Contemporary British Art at the Scottish National Gallery of Modern Art, Edinburgh (2002). The Ingleby Gallery, Edinburgh, held solo presentations of Owen’s work in 2011 and 2014. He has gone on to exhibit in the UK and internationally. He lives and works in Edinburgh.
.
.
.
.
.
.
.
source: fubiznet