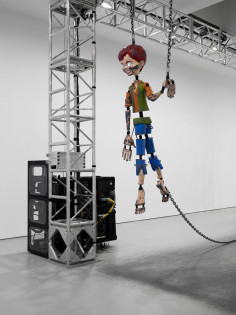 source: phaidon
It can be tricky picking out the masterpieces in contemporary art, yet Jordan Wolfson’s grimy, sexy, animatronic work, (Female figure) (2014), is surely one of those in contention. The spooky animated figure, with the body of a stripper, the face of a witch and the voice of the artist himself, helped establish Wolfson a position at the forefront of contemporary art. The work was partially inspired by a trip Wolfson took with fellow artist Alex Israel to the Epcot centre at Walt Disney World in Florida, towards the end of 2012.

Female figure (2014) – Jordan Wolfson
Wolfson, who had been best known for his animation work, was, at the time, contemplating a new video work, drawing on the character of Holli Would, the cartoon vamp from the 1992 animated feature film, Cool World. However, after seeing just how lifelike Disney managed to make its robots, the artist switched to a sculptural medium, creating his ghoulish girl with the help of Hollywood puppetry experts.

Two years on from that work’s debut at David Zwirner in New York, Wolfson is preparing to spring another animated figure on the art world, just in time for Frieze Week – and this one promises to be just as creepy.

Colored sculpture, 2016, forms part of Wolfson’s forthcoming solo exhibition, opening on 5 May at Zwirner’s 525 West 19th Street gallery in Manhattan. Like its elder sister, Colored sculpture 2016 is based, in part, on cartoonish cultural precedents.

“The red hair, freckles, and boyish look of Colored sculpture draw associations to such literary and pop cultural characters as Huckleberry Finn, Howdy Doody, and Alfred E. Neuman, the mascot of MAD magazine,” the gallery explains. “Highly polished in appearance, the work is suspended with heavy chains from a large mechanized gantry, which is programmed to choreograph its movements. The sheer physicality of the installation, which fills the entire gallery space and includes the work being hoisted and thrown forcefully to the ground, viscerally blurs the distinction between figuration and abstraction, while furthering the formal and narrative possibilities of sculpture.”

Yet this violent, overly cute little boy also features some of Wolfson’s video elements too, as well as some creepy, new animatronic treatments.

“The sculpture’s eyes employ facial recognition technology to track spectators’ gazes and movements,” explains the gallery. “Using fibre optics, its eyes also intermittently display a range of imagery and video footage, including the artist’s own animations and filmed footage, and other found visual material, all of which seem to mine the subconscious preoccupations and desires of our society and consumer culture.”

Colored sculpture 2016 – Jordan Wolfson, courtesy of the artist’s Instagram
Jordan’s new figure might look infantile, but it sounds like he’s far from innocent. For more on the show, go here; for more on Wolfson’s fellow cohort of contemporary artists order a copy of The 21st Century Art Book here; and to buy works by this artist, take a look at his page over on Art Space.
.
.
.
.
.
.
.
source: artnews
Last July I was at Jordan Wolfson’s house in the Hollywood Hills, sharing a nice lunch with the artist outside by his pool, even though it was raining. Precipitation in Los Angeles is spoken of like a biblical plague when it’s hypothetical, and maybe the driving gets a little dicier, but really, people just sort of shrug. The lawn guys constructing Wolfson’s poolside garden worked during the drizzle.

Wolfson said he was working on a new show, and invited me to the studio, which is in Glendale, on the other side of Griffith Park, higher up where there’s more space. I went a few days later. Wolfson’s studio is at a Hollywood animatronics lab that specializes in creature effects and building out robotics models for movies. It’s within a gigantic complex, a constellation of multiple jet-size hangars, and after finding the right one, I was brought down some mysterious hallways until opening the right door in the fun house, where Wolfson was talking with engineers who were testing structural solvency, and with tech guys troubleshooting plugging fiber optics capabilities into a giant head.

Then Wolfson showed me a model of a gallery, about the height of his forearm. The model had steel beams going horizontal with gurneys stuck to their undersides, through which cables zipped by. These cables were affixed to a figure that they would dangle, spin, jerk, and then drop hard on the floor, repeatedly. The figure, Wolfson told me, was supposed to represent Huck Finn.

Even in miniature, it was clear the installation—part mixed-media sculpture, part choreographed performance, part massive whirring machine there to activate it all—would be something to behold when it debuted, whenever that would be. It was originally slated to make its bow at the Serpentine Galleries, in London, but plans fell through due to scheduling issues. Then, in April, word went out that Zwirner’s May show, corresponding with Frieze Week, would be a solo show from Wolfson, featuring a new work called Colored Sculpture. The accompanying image was of the artist taking a picture on his phone of a freckled head that could have passed for Huck Finn. No further details were revealed.

I texted Jordan, and we arranged for a time to see the work once it was installed, a few days before its public unveiling. I arrived at David Zwirner Gallery on 19th Street one afternoon last week, and Wolfson led me into one of the spaces in the gallery. Clanging noises echoed into the hallway. I entered the gallery alone, as Wolfson said he wanted me to experience the work alone. In front of me was a gigantic steel outline of a cube with cylinders spinning and whirring to release metal chains that were holding up the larger-than-life figure, which had joints throughout its body to allow it to be contorted in harrowing, grotesque ways. The winches that held up the chains went left to right in various speeds, and the chains were coiled and released in different measures, allowing for the figure to get twisted into any number of permutations—it’s a precise dance that Wolfson programmed himself, to allow for viewers to watch the figure float within the space in a carefully calibrated cycle of movements: quick starts, long silences and placid moments, atonal spasms, swooping glides, and those punishing falls to the floor. It became more wrenching and powerful the more cycles I took in. After some slow movements and dramatic silences, the figure would get thrashed toward me, the chains making deafening noises and the figure’s head getting smashed again and again on the ground.

During certain points, the hanging man came to the foreground, and hung perpendicular to the ground, no limb askew, and then slowly glided left-to-right, like a nonthreatening ghost just kind of hovering in front of you. And then the eyes: they lit up with LED screens, and the pupils and irises dilated in a way that seems deeply familiar. The eyes use facial recognition technology to lock gazes with visitors in the room, and then employ fiber optics to intimate an expression of deep pain. (They also have the capability to show some of the video works that Wolfson is known for—though he’s never shown any in an environment quite like this.)

The entire presentation could remind one of Wolfson’s singing robot sculpture (Female figure) 2014 (2014) Wolfson’s last foray into robotics, two years ago at this same space. And while the two works are quite different—the new “robot” is now being jerked around by a mechanical puppet master in the form of chains on pulleys, instead of relying on combustion from an internal motorized system—Wolfson admits that “it’s kind of an extension” of that show.

“I’m not consciously trying to do anything like that again,” Wolfson told me at Zwirner. “But it is almost like an extension of (Female figure).”

Before we started talking, Wolfson mentioned that he didn’t want to do an interview, really, he just wanted me to write about what I thought about the show, having seen the lead-up in California. I told him that, at first, the piece reminded me of a crucifixion. One of the chains, after all, had pierced the figure’s palm, a direct stigmata point.

“That hadn’t actually occurred to me, the crucifixion,” Wolfson said.

I asked him how he came up with the idea for the show. A partner at Zwirner had told me that, shortly after his last solo show at the gallery, Wolfson had told her that he had this vision of a person falling and collapsing on the the ground, over and over again.

“You just see it in your mind,” he said, and when I asked what the work meant to him he went into a zone, saying, “It’s a set of formal problem solving issues,” and “the artwork is a multifaceted device,” and “it does elegance,” and “there’s an indifference to the movement,” and “it’s real violence damaging the work.”

Well, even if the work isn’t actually being damaged when it gets dropped to the floor or whipped around—it’s built in a way that can withstand the hits—the violence is absolutely present.

“It was about me as an artist relating to the object,” Wolfson added. “It’s hard for me to feel anything because I made it.”

I told him that he had made the steel girders and whirring chain coils and harnesses and winches part of the work itself—the guts exposed, the things moving the work exposed and put in the spotlight—and he said, “It goes between animate and inanimate, figuration and abstraction, passivity and violence. It’s a formal exercise made from a subjective source.”

He told me that I should come back in a few days to see it again, as the work needs time to unveil itself. Plus, the sound component wasn’t quite working yet. So, on Thursday last week, hours before the exhibition’s opening—and after a few days of fairs during which Colored Sculpture had become perhaps the most talked-about work about among critics—I went back to Zwirner, this time finding myself among a few collectors and their families. (I would hear, later, that the line to get into Wolfson’s public opening stretched around the block, a cliché that doesn’t actually happen too often in Chelsea, where the blocks are quite big.) This time, with a dozen or so people in the room, the facial recognition worked so the eyes would skip between the different people in the room, never resting on me. And the sound was working as well: at times, a voice would come on over the speakers intoning a bizarre set of numbered virtues, and then at other times “When a Man Loves a Woman” would play at blast-level before abruptly getting cut off.

Wolfson came in mid-airborne dance, and after a few brief hellos, came up to me.

“I’m so glad you came back,” he said with a smile, the brutality of his work unfurling in front of him. “You have to stand here,” he told me, gesturing at a spot directly in the middle.

After a few minutes of staring at the figure, I locked eyes with it, the face distinctly registering pain and loneliness before collapsing to the floor, the chains lashing him about, pummeling him to the ground, his head getting smashed and smashed and smashed to the deafening sound of “When a Man Loves a Woman.”