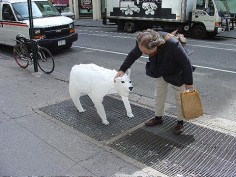 It’s been a while since Joshua Allen Harris’ plastic shopping bag animal sculptures have been spotted in NYC and so it was surprising to see new footage on YouTube. Paul Barnes-Hoggett, a self described “full time Englishman in New York,” shot video of the signature street art early Thursday on Astor Place.

Like previous installations, the creature, in this case a polar bear, was fastened to a subway grate and would inflate from the passing air as a train pulls into the station. According to Barnes-Hoggett, there may be a very practical reason for its return. “They were filming some kind of documentary on street art, so maybe it was for that,” he tells us.
.
.
.
.
.
.
.
source: dailymail

At first glance it may look like a load of old trash left on New York’s subway grates.
But as a train roars past underneath the vents, the air causes this ‘garbage’ to inflate and reveal a 15ft-high minotaur, or a polar bear and even the Loch Ness Monster. These inflatable bag sculptures are the work of U.S. street artist Joshua Allen Harris. He uses ordinary black garbage and shopping bags to make his beautiful pieces. He then distributes them around the Big Apple, tying them down to subway grates with tape in the hope the strong gusts from the trains will be strong enough to inflate his characters and animate them. ‘I guess it’s inflatable street art,’ Mr Harris told New York Magazine. ‘A sculpture that works on the street, that inflates with subway and exhaust air.
‘Part of the magic of it is that it looks like trash on the street and then it comes to life.’
Mr Harris’ first work was a white polar bear.
‘I figured with four paws it would give me enough wind to stand up and it worked,’ he said. ‘He looked really cool and had a lot of nice animation with his life and his death, in his inflation and deflation.’
Pleased with his success Mr Harris went home for the night but the next morning pictures of his polar bear had been sent around the world on blogs and in forums.
‘Someone photographed it one night, it got put up on a website and it spread,’ Mr Harris said. ‘The response was amazing and got me interested (in the work) again.
‘Everyone loves it, everyone’s really interested in how it works – it’s magic. That’s what art is about.