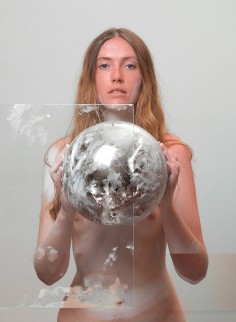 source: artinamericamagazine
Joshua Citarella is a young New York artist with a particular adeptness at navigating the increasingly blurry divide between the gallery and the Internet. For his first solo exhibition at Higher Pictures, Citarella presented five large-scale C-prints (all 2013) that toy with the often porous boundaries between reality and representation within contemporary image-making. Though Citarella does take the photos that form the basis of his works, his practice gives precedence to Photoshop’s postproduction techniques. He is perhaps best known for his involvement in The Jogging, a popular image-based Tumblr of online-only art, along with the more recent “.PSD Show,” his ongoing online exhibition of downloadable raw Photoshop files.
Paradoxically, Citarella’s background in this dematerialized sphere of online art is exactly what gave his work at Higher Pictures a nuanced sense of materiality. Body Anointed with Nitroglycerin Awaits Transfiguration depicts a reclining female nude daubed with silver and surrounded by shimmering flecks, digital glitches (intentionally and painstakingly placed by Citarella) resulting from the same Photoshop techniques that have been used to render the woman’s body blemish-free. Digital dust seems to have impossibly made its way onto the work’s actual frame, where silver fingerprints suggest a slippage between the radiantly over-perfected image and its material grounding in the gallery.
Citarella is adept enough at image manipulation to make viewers unsure to what extent, if any, the subjects have been digitally altered, propagating a perpetual, willful confusion appropriate to today’s technological shifts that continually reshape the relationship between images and their referents. Immaterial Transmutations of Lead and Gold I makes this apparent with its banally tasteful depiction of a scattering of small rocks set among tree branches stripped of bark, all arranged against a solid white backdrop. The rocks appear to be composed of varying ratios of lead and gold; some are clearly half and half, while others have a gradient between the two elements, as though captured in mid-transformation. The allusion to alchemy in the piece’s title is apt; Citarella’s slick precision suggests that any number of conceivable objects could be conflated, as if by magic.
His images arguably also touch on ideas that have been circulating recently among artists such as Timur Si-Qin and Mark Leckey regarding “techno-animism.” The notion holds that, as our environment is increasingly technologized, it becomes increasingly mystified. The clearest illustration of this is Mainframe Stores Red Channel Data from REM Sleep Beta Waves, a photograph of a minimal and elegant crimson-painted server box against a white wall and concrete floor; the stark, perfected simplicity of the image stands in marked contrast to the utter technological complexity harbored by the server.
For Citarella, objects are sites of dissimulation, never quite what they seem. When taken as a whole, aspects of his solo debut can appear overly oblique, but his work has a refreshing lack of archness that stands in contrast to that of many of his so-called post-Internet contemporaries. Instead, Citarella seems fully committed to the pristine surfaces made possible by modern technology, discovering there a kind of transcendent blankness bordering on the spiritual.
.
.
.
.
.
.
.
source: lavalette
Joshua Citarella (b. 1987) is a New York based artist and curator, whose work includes aspects of photography, digital media and sculpture. He is the coordinator of online projects and physical exhibitions including Flatten Image (New York, 2011) and Merge Visible (Chicago, 2012), as well as the continuing online exhibition thePSDshow.org (2012–) featuring works by artists Lucas Blalock, Daniel Everett, John Houck, Kate Steciw, among others. He is currently based in Brooklyn, NY.