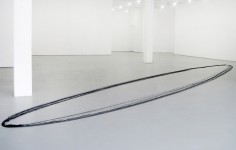 Personal Statement
I deal with performance, physicality, materiality, collaboration and socially engaged practices. I am interested in a trans-disciplinary mode of production involving experiential and corporeal knowledge as avenues to investigate time, site-specificity and human interaction.
.
.
.
.
.
.
.
source: make-spacenet

Jovencio de la Paz lives and works in Chicago. His performances, installations and collaborative projects have been shown most recently at the Museum of Contemporary Craft in Portland, Oregon and the Sculpture Center in Cleveland, Ohio. He is an Instructor in the School of the Art Institute of Chicago’s department of Fiber and Material Studies, where he teaches both introductory techniques in textile processes as well as current issues in contemporary craft. His installations, performances and sculptures deal with the material embodiments of immaterial phenomena, and his interests are in the ephemeral and mystic qualities in thread and cloth. He received his MFA at the Cranbrook Academy of Art and his BFA from SAIC.

“Recently, I have been working with thread, which is ever mutable. I am interested in thread’s particular service to other forms of making, to weaving and to other textile processes. As an interstitial material, it is rarely a thing on its own. It is continuously trapped between raw materials and finished materials, between cotton field and denim, between sheep’s wool and sweater. Much of textile technology serves one purpose, and that is to keep thread in order, to keep thread away from its one desire, which is to be in tangles. I am interested in the moment of a tangle, in the psychological tension of loose thread. Beginning at the spinning-wheel, my current projects end in large-scale floor drawings, which are temporary and repetitive. Making these drawings requires that my body moves thread through space, and the image left on the floor is a physical trace of accreted movement.“