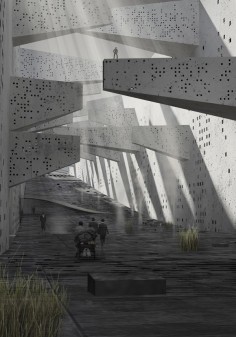 For the purpose of consciously evoking society’s reaction, an architectural object is inserted into the main recreational zone of New York – Central Park Jovile Porvaneckaite. Moreover, social and cultural phenomena inspired by the innovative form are discussed. The aim of the project is to analyse the process of form modelling and, consequently, perform a research of the form as power, based on an experimental project carried out by the author. The article aims at establishing the influence of the volume deficiency formed or shaped in the city’s planning system on the suggestibility of the building’s form.
In the project concerned, the term volume deficiency is used to describe the stress environment in the city structure, formed on the artistic, planning, volume, stylistic, value or historical base, and programming continuity of the above processes after integration of the newly proposed object into the environment mentioned.
The artistic value of the volume influenced by the stress environment and adapted into it provides the suggestibility characteristic of the object of mass attraction to the form. The form designed in such a space obtains all the features characteristic of an architectural sign, the city’s dominant. The form of the City of pain project is created as a connective bridge between a narrow city system and a large area of artificial recreational space. The building as a sign is formed as a corridor for social provocation and a laboratory for the modern society’s behaviour.