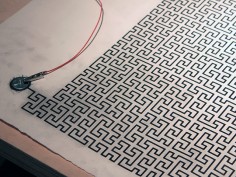 Entitled Field and Loops: Drawing series 6, these graphite drawings take the form of fractal antennas. When connected to a sound system they make audible the critical mass of signals and energy emitted from the local environment.

Formally the drawings operate as meditative fields that depict and compress time and space within distorted sound-scapes. With a nod to Fluxus art of the 1960s, Hinterding explores the world we occupy across media such as sound art and experimental drawing.

Field and Loops challenges our thoughts about representation, functionality and energy scavenging while evidencing the local fields and contributing to the site-specific and dynamic aural landscape that is being generated literally out of thin air.
.
.
.
.
.
.
.
source: haineshinterdingnet

Loops and Fields, is a collection of drawings that resonate sympathetically to the electromagnetic fields within the gallery. These graphite drawings function as graphic antennas and explore the qualities and inherent nature of a combination of hand-drawn and mathematically generated forms. Delving into algorithmic structures, fractals and the chaotic nature of the hand drawn line, these drawings are an exploration of conductive materials and the possibilities for drawing electronic components. When connected to a sound system they make audible their interior activity and reveal the energy that exists in the immediate environment.Relying on the basic principles of the directional loop antenna, the drawings in Loops and Fields, like any receiving antenna, convert an electromagnetic wave into a voltage; the loop antenna is particularly sensitive to magnetic fields and outputs a voltage proportional to that field. Monitoring this activity allows us to experience the local fields and generates a site-specific and dynamic aural landscape.The different shapes and line qualities that make up the algorithmically generated and stencilled drawings come from thinking about the possibilities of extending a line. Fractal mathematics and the research into fractal antennas has focused on reducing the overall size and space an antenna needs to occupy. My interest is in the frequency range at the lower regions of the spectrum, where the wavelength is large; so my interpretation of recent antenna design research has led me to explore the possibilities for drawing antennas that can receive large wavelengths, on something the size of a standard piece of fine art paper. As a result I have been looking at some very cool mathematicians such as Helge Von Koch (1870–1924), Stanislaw Ulam (1909–1984) and Pierre de Fermat (c1601–1665) and working with their maths.The lack of any sealant on the graphite leaves the drawings slightly materially unstable and they also function to some degree like open circuit devices. The result of this is that when the drawings are touched, the volume of the sound increases. This change in volume appears to reflect the changes in the electrical conductance of people’s skin, described as the galvanic skin response (GSR). Accordingly, different people have mildly different effects on the drawings when they touch or come into close proximity to them. Generally, it’s the volume that changes rather than the pitch, but this increase in volume opens the sound out, so that you hear more of the nuances and harmonics within the sound.Human interaction with the drawings changes them, smudging and leaving marks on their surfaces, and breaking a fundamental art museum convention, that of not touching. New media and interactive work is complete with reset switches, but this is an interactivity of consequence that endures in the work.The graphic nature of these antennas opens up thoughts about the potential for energy scavenging, while providing a platform for representation and functionality to collide through drawing.Joyce Hinterding, (First published in the catalogue for Freehand: recent Australian drawing, edited by Linda Micheal, Heide Museum of Modern Art. Australia, Nov 2010)
.
.
.
.
.
.
.
source: haineshinterdingnet

Joyce Hinterding’s work explores physical and virtual dynamics. Her practice is based on investigations into energetic forces, through custom built field recording and monitoring technologies. These explorations into acoustic and electromagnetic phenomena have produced large sculptural antenna works, experimental drawings, video and sound-producing installations and experimental audio works for performance. She often collaborates with artist David Haines to produce large scale immersive video and sound works that explore the tension between the fictive and the phenomenal. Joyce currently lives in The Blue Mountains, NSW, Australia, she is represented by Breenspace, Sydney, her audio work has been released by antiopic and she lectures at Sydney College of the Arts, Sydney University.

Loops and Fields: Induction Drawings is a collection of drawings that resonate sympathetically with the electromagnetic fields within the gallery space. When connected to a sound system the drawings function as antennas and make the spectral activity audible. The lines and loops refer to the trust we have in the power of media to discover the world.

About the artist
Joyce Hinterding produces works that explore physical and virtual dynamics. Her practice is based on investigations into energetic forces, through custom-built field recording and monitoring technologies. These explorations into acoustic and electromagnetic phenomena have produced large sculptural antenna works, experimental drawings, video and sound-producing installations and experimental audio works for performance. She often collaborates with artist David Haines to produce large-scale immersive video and sound works that explore the tension between the fictive and the phenomenal. Joyce lives and works in the Blue Mountains, Australia and is represented by Breenspace, Sydney; her audio work has been released by Antiopic.