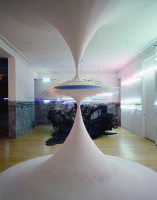 “Before, there have been a couple pieces which have been emotional. But most of the time the work is about form and space, and I might be involved in building or architecture or a romance about being Chinese. ‘Buckets of Rain’ was directly about a great loss or a kind of drama, and more about choices- black and white, life and death, good and bad, and the impact of that. It just embarrasses me even to think that way, that I did that. But, you know, I didn’t feel I had a choice.”
– Judy Pfaff
.
.
.
.
.
.
source: digplanet

Judy Pfaff, born 1946 in London, England, is an American artist, known mainly for Installation art. Pfaff has received numerous awards for her work, including a John D. and Catherine T. MacArthur Foundation Award (2004) and fellowships from the John Simon Guggenheim Memorial Foundation (1983) and the National Endowment for the Arts (1986). Major exhibitions have been held of her work at the University of Wisconsin–Madison (2002), Denver Art Museum (1994) and Saint Louis Art Museum (1989).

Pfaff moved to United States at the age of thirteen. She attended the prestigious Cass Technical High School. She did her undergraduate work at Washington University and received her Master of Fine Arts degree from Yale University.

Pfaff creates paintings, sculpture, prints, and installation art. Of the creation of her work, she says “I’ve always done prints and drawings, always. No one buys those installations, so when you see things that are portable that I’m not attached to, they’re probably two-dimensional. If you get an installation of mine, you inherit [my assistant] Ryan, myself, a crew, the dog, the noise, the dirt. We wreck the house. So if you don’t want that, then you get prints and drawings.”

Her installation art has been compared to that of “a collagist in space.”. Roberta Smith, critic for The New York Times, wrote of Pfaff’s work, “she has been creating elaborately impure, implicitly narrative environments for more than 25 years. She is at the top of her form in the airy, exhilarating Neither Here Nor There.”Benjamin Genocchio, also with the New York Times, described several of Pfaff’s works undergoing renovation:

“Although these works look random, when you begin to get into them it is remarkable how all the elements seem to hang together and develop on one another. She seems somehow to get order and disorder working for her at the same time. It is a very contemporary quality, given our lives today.”
She has also done scenic design. In 2010 meringer/McEnery/Yoke showed a retrospective ranging from the late 1970s to recent work. In a review in The Brooklyn Rail, Kara L. Rooney writes of the survey’s cohesion, “somehow, Pfaff’s eclectic interpretation of ’80s flamboyance, ’90s insecurity, and the aughts’ incessant optimism succeeds.”

Pfaff has previous taught at the California Institute of the Arts form 1976 to 1979. She joined the faculty at Bard College in New York in 1994, where she is currently the codirector of the Studio Arts program.