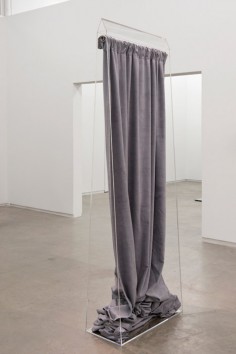 Rudy Radul (Vancouver, Canada) is an artist whose interdisciplinary practice has recently focused on video installation but also includes sculpture, photography, performance and mixed media installations. She has exhibited her work nationally and internationally, and her creative writing and essays have appeared in a variety of publications since 1991. Her latest and most ambitious work is called World Rehearsal Court (2009). A large-scale media installation, this work draws on Radul’s research into the role of theatricality and new technologies in the court of law and questions the distinctions between experience, testimony, truth and fiction that the law attempts to make distinct. In 2009 this work was the subject of a solo exhibition at the Morris and Helen Belkin Gallery, University of British Columbia, Vancouver and has travelled to the Generali Foudation, Vienna; Media City Seoul; and in 2011 will be mounted in a solo exhibition at the Henie-Onstad Art Center, Oslo. In 2000 she received her MFA in visual and media arts from Bard College, Annandale-on-Hudson. Radul is currently chair of the graduate program at the School for the Contemporary Arts, Simon Fraser University, Vancouver.
.
.
.
.
.
.
.
source: empacrpiedu

Judy Radul was born in Lillooet, British Columbia, Canada. Her interdisciplinary practice has recently focused on video installation but also includes sculpture, photography, performance, and mixed media installations. Her latest works involve an original computer-controlled system for live and pre-recorded video. Her work, Look.Look Away. Look Back, was shown in the Berlin Biennale 8 (2014). Her large-scale media installation World Rehearsal Court (2009) has been shown at the Morris and Helen Belkin Gallery, U.B.C. Vancouver; the Generali Foundation, Vienna; Media City, Seoul, South Korea and Henie Onstad Art Center in Oslo, Norway. Related to this project, with Marit Paasche she co-edited a book of collected essays and images, A Thousand Eyes: Media Technology, Law and Aesthetics (Sternberg Press, Berlin, 2011). She has a BA in fine and performing arts from Simon Fraser University and an MFA in visual and media arts from Bard College, New York. She is represented by Catriona Jeffries Gallery and teaches at Simon Fraser University. In 2012-13 Radul was a guest of the DAAD Artist-in-Berlin Program.