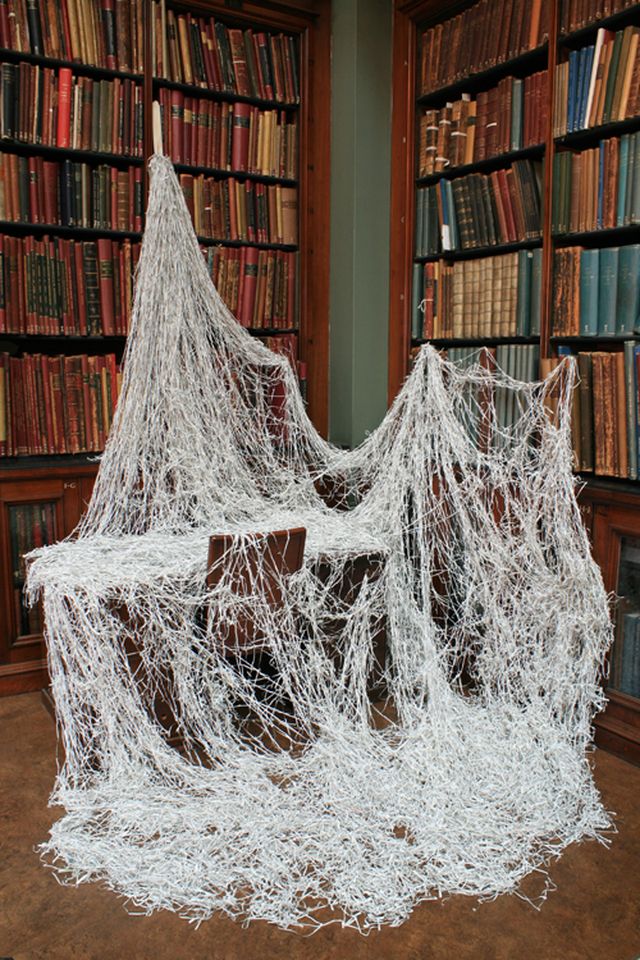 Work: Kwon creates captivating works, quite literally, from the printed page. Using abandoned and disused books, she shreds the pages by hand to create magnificent ‘book sculptures’. These effervescent sculptures, brimming with energy, flow from their spines in the form of cascading waterfalls. Each book, thus deconstructed, attains to a new existence through this transformational creative process. Much of her work plays with ideas of destruction and re-creation. Kwon’s cutting and slicing techniques become a performance with each fragile page demanding attention. Although unseen by the viewer, her intricate actions during this process are projected through the complexity of the finished piece. Kwon’s imagination is realised through the adaptable structure of the book which transcends its original purpose. The act of the book’s expansion alludes to a feeling of freedom and movement, mimicking in a sense, her migratory experience. As she cuts each strand, the process becomes a means to travel the tracks of half-held memories and to retrace those first conscious steps towards the creation of a new life. Text from October Gallery, London.
Photographer: Jukhee Kwon
.
.
.
.
.
.
.
source: lascatolagallery

Jukhee Kwon was born in Dae-Jun in Korea 1981, she lives and works in London.

Jukhee Kwon’s work is the accumulative result of a destructive and repetitive process; the individual book, through the artist’s reworking, becomes something monumental, often returning to its original form- from tree to book, from book to tree. In Being La Scatola Gallery will house a new work by Kwon taking the form of a suspended and overflowing bookcase. The artist notes a personal and cultural narrative within her work, which came after the act of making; a feeling of freedom from restraint perhaps, or a living-through of her own migratory experience illustrated in the books themselves. Kwon creates through the destructive process, transforming both the object itself and its relation to the viewer; her work is inspired by artist John Latham, who used ideas of disintegration and the book, notably changing the form of Greenberg’s Art and Culture by asking his students to chew the pages to result in a distilled liquid version.
Korean artist Chan Kwang Young is another notable connection; his paper sculptures, in a manner resounding heavily with the work of Kwon, take the form of huge and arresting structures made from the most delicate of parts; basic pockets of information which combine and open to become something both new and referential. Through negation Kwon’s books become beings, returned in part to their original form. Jukhee Kwon was born in Dae-Jun in Korea in 1981 and now lives and works in London. She studied a BA in Fine Art at Chung-ang University in Korea and completed her MA in Book Arts from Camberwell College, University of the Arts London in 2011. In 2004 she was awarded the An-dong painting prize in Korea. Kwon has exhibited widely in both Europe and Korea. Selected recent exhibitions include Korean Art Now: Place Not Found, Smokehouse Gallery, London 2012; Works on Paper, La Scatola Gallery in association with GX Gallery, London 2012; Inside-out, book sculpture work, London 2011; The Face of the Shape, La Scatola Gallery, London 2011, Four, everyday life, Hanmi Gallery, London 2011; Trajector Art Fair, Brussels 2011; Casting an eye on Korea, Paris 2011.