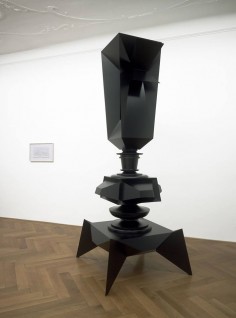 ‘The family that lays together stays together’, Robert Crumb once wrote. It is with similar breezy indifference that Julian Göthe forces historical families of object-making into incestuous cohabitation. The tracery of black metalwork in his pieces, two of which were included in his show ‘Beams are Gonna Find Me’ at Sorcha Dallas, recalls all manner of schools of design and architecture. The troubled democracy of these combinations seems to sit surprisingly comfortably with a knowing aesthetic; the horrible design that one might find in a fashionable club is part of Göthe’s mission to tease. It all seems like artful politeness on the surface, but then the repetition of forms and odd subject matter jolt you from reading them as mere hip stylizations. His assimilation of the big movements (Surrealism and Abstraction seem to be among his favourites) into this world of interior design provides an opportunity for Göthe to create oddly weighted pairings such as feathers with metal or wood with paper.

The modified and sculpted body appears often. Göthe takes the glistening torsos of muscle beach and transposes them to the less sympathetic climes of northern Europe. In the film Walls Talk (2005, made with Anje Stöfler Hamad and screened at the opening) the uniform perma-tan is removed with shaky photocopying, the perfect bodies developing new scratches and bumps, their flesh mottled like statues. These images are juxtaposed with structural detail: bodies and landscapes merge, muscle-bound legs become feats of structural engineering and buildings become anthropomorphic kings and queens.

In the smaller half of the gallery the bodybuilder’s pins reappear in schematic form in Smashing (2006), in which a black frame houses a mirrored black mass descending to two tottering limbs. The confines of the space pit this shiny crab-man against an alarming-looking cabinet that levitates above the floor. Like a car cruising the strip, this piece of furniture seems to have been tackled by MTV’s Pimp My Ride vehicle modification experts and appears barely to touch the wall by virtue of glowing neon back lights in an incongruous blue colour.

By luck or by design this object is several things at once, with ornate spiral columns giving way to a pointed ecclesiastical top. Göthe has adorned his find with geometric paper constructions as well as custom car lights. The result is to give it a quality it previously didn’t possess. Gazing in through glassless openings, the shapes appear as odd treasures. In Werner Herzog’s Herz aus Glas (Heart of Glass, 1976) a girl under hypnosis is asked to describe the contents of an ornate cabinet filled with ruby glass. ‘Here’s a church made of glass; animals live in the church’, she murmurs. Göthe similarly is toying with making these folds and points defy a description of what they appear to be. It is a well-devised use of the space that might look a little anaemic if everything were more demure in scale or if the various gravity-defying pieces got to touch the floor with their wonky feet.

As if lifted to some arbitrary high watermark, signs of civilization have drifted up to this unreal space, like the characters in J.G Ballard’s The Drowned World (1962) who continue to sip Martinis in the stifling heat of their flooded surroundings, where Paul Delvaux paintings hang above the mantelpiece, abstracted from an art history that was lost in the flood. In Walls Talk we get a letter-box view out onto this topsy-turvy world. With no sense of hier-archy the viewpoint spins across prints and photocopies, all rendered in a grey mid-tone; we swim over bodybuilder’s bottoms and then down the street of some Utopian project. Spiralling computerized lines unfurl like weeds. These swirling lines never show you where they emanate from, occasionally coming across like some demented Ferris wheel and at other times, owing to the heavy pixelation, like steel cable yanking back and forth.

Göthe frequently speaks about stage shows and showgirls, and the dark jollity of these partially humanized creations is evocative of bodybuilders or cancan girls. In previous works these have stepped out onto the floor, but at Sorcha Dallas they all stuck to the wall, as if waiting backstage. They are self-conscious and sassy, sculptural renditions of Ballard’s gin-swigging, art-loving jungle temptresses.
.
.
.
.
.
.
.
source: animateprojectsorg

Julian Göthe lives and works in Berlin. He has exhibited his work internationally, with solo shows at Cabinet, London, Sorcha Dallas, Glasgow and Kuntsthalle, Berlin. Recent group shows include While Bodies Get Mirrored at the Migros Museum in Zurich and Silent Revolution at K21 Kunstsammlung Nordrhein Westfalen, Düsseldorf. He has also worked in collaboration in other artforms, including a commission from the Munich Opera Festival.
.
.
.
.
.
.
.
source: bayerischestaatsoperde