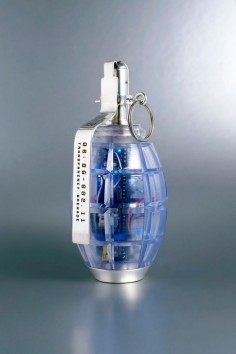 The lack of Corporate and Governmental transparency has been a topic of much controversy in recent years, yet our only tool for encouraging greater openness is the slow, tedious process of policy reform.

Presented in the form of a Soviet F1 Hand Grenade, the Transparency Grenade is an iconic cure for these frustrations, making the process of leaking information from closed meetings as easy as pulling a pin.

Equipped with a tiny computer, microphone and powerful wireless antenna, the Transparency Grenade captures network traffic and audio at the site and securely and anonymously streams it to a dedicated server where it is mined for information. User names, hostnames, IP addresses, unencrypted email fragments, web pages, images and voice extracted from this data and then presented on an online, public map, shown at the location of the detonation.

Whether trusted employee, civil servant or concerned citizen, greater openness was never so close at hand..

The volatility of information in networked, digital contexts frames a precedent for clamouring (and often unrealistic) attempts to contain it. This increasingly influences how we use networks and think about the right to information itself; today we see the fear of the leak actively exploited by law makers to afford organisations greater opacity and thus control..

This anxiety, this ‘network insecurity’, impacts not just upon the freedom of speech but the felt instinct to speak at all. It would now seem letting public know what’s going on inside a publicly funded organisation is somehow to do ‘wrong’ -Bradley Manning a sacrificial lamb to that effect..

Meanwhile, civil servants and publicly-owned companies continue to make decisions behind guarded doors that impact the lives of many, often leaving us feeling powerless to effect change, both in and out of a democratic context.

The Transparency Grenade seeks to capture these important tensions in an iconic, hand-held package while simultaneously opening up a conversation about just how much implicit trust we place in network infrastructure; infrastructure that reaches ever more deeply into our lives.
Further details

The core concept will continue to live on as an application for Android devices and server-side software. See the section Android application below for more..

The body is made of Tusk2700T, a highly resilient translucent resin, printed from a stereo-lithography model made by CAD designer Ralph Witthuhn based on a replica Soviet F1 Hand Grenade. Metal parts were hand-crafted from 925/1000 sterling silver by Susanne Stauch, complete with operational trigger mechanism, screw-on locking caps and engraving.

Thanks to a generous donation of hardware from Scott Robinson (@quadhome), development of an Android application is underway, for rooted Android devices. This will mimic some of the functionality of the grenade, with the TG program running ‘invisibly’ on their phone as a backgrounded application. A GUI will be provided for configuration. It will allow upload using a 2048 bit SSH tunnel over the user’s own 4G connection, automatically determining the location via the device’s own GPS system and using this to position the ‘detonation’ on the map interface. Naturally this is a little more practical than walking into a meeting with a grenade in your jacket pocket.

Due to legal concerns the author will not provide a server for using this application. However, all code will be published for study and so that others can set up their own service, should they find a worthy need for it. I will never suggest targets for this particular use of packet-capture technology (technology that’s been around for years anyway!). Even as the author, I do not use this technology myself in realworld situations. This is a critical research project.
Software development tools used

Any work done on the software side of the Transparency Grenade was done on a laptop running Debian Stable. Programming was done using the IDE VIM. Minicom was used for serial communications using a USB Serial FTDI from Sparkfun electronics.
Grenade Software

The Transparency Grenade leverages GNU/Linux with the following software relevant to the capture part:

Capture is trivial, sent over an encrypted tunnel (ssh) like so:
# Capture on monitor device with full snaplen over SSH tunnel to date formatted
# filename

Julian Oliver is a New Zealander, Critical Engineer and artist based in Berlin. His work and lectures have been presented at many museums, galleries, international electronic-art events and conferences, including the Tate Modern, Transmediale, the Chaos Computer Congress, Ars Electronica, FILE and the Japan Media Arts Festival. Julian has received several awards, most notably the distinguished Golden Nica at Prix Ars Electronica 2011 for the project Newstweek (with Daniil Vasiliev).

Julian has also given numerous workshops and master classes in software art, data forensics, creative hacking, computer networking, counter-surveillance, object-oriented programming for artists, augmented reality, virtual architecture, video-game development, information visualisation and UNIX/Linux worldwide. He is an advocate of Free and Open Source Software and is a supporter of, and contributor to, initiatives that promote and reinforce rights in the networked domain.

Articles about Julian’s work, or work he’s made with others, have appeared in many news channels. Among them are The BBC (UK), The Age (AU), Der Spiegel (DE), El Pais (ES), Liberation (FR), The New York Times (US), La Vanguardia (ES), The Guardian Online (UK), Cosmopolitan (US), Wired (DE, US, UK), Slashdot (US), Boing Boing (US), Computer World (World) and several television stations worldwide.