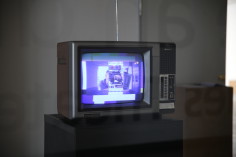 source:ilikethisartnet
“Föhnseher rises from the scrap heap of analog TV. Unlike other televisions, Föhnseher captures and displays images downloaded by people on surrounding local wireless networks.

Other people’s phones, laptops and tablet computers all become broadcast stations for this device, replacing the forgotten television towers of old.

The name föhnseher derives from fernseher, the German word for television, and the föhn, a strange warm wind known to the south of Germany. The words have a very similar pronunciation.” –Julian Oliver
.
.
.
.
.
.
.
source:cdmlink
Julian Oliver’s “Föhnseher” spies on images on a wifi network, then “broadcasts” them to that older, less “pull”-based medium, the analog television. Have a look at the demonstration, as made by fellow media artist Servando Barreiro.

Fittingly, we’ll get to see Julian’s work across from Berlin’s own Fernsehturm (TV tower). I’m pleased to be part of an ongoing partnership with the LEAP Gallery here in Berlin to feature new media art and sound; since the content is largely sonic in nature for the first installment, read up on what we’ve got planned at CDMusic:
A New Partnership, a New Series on Digital Sound and Art in Berlin; First Look at the Artists

And, of course, if you are near Berlin, come visit us Saturday night 20h on the 26h; see Facebook and a timelapse video demonstrating how to get into the space. (Admission free.)

Julian’s work to me never ceases to impress; with Danja Vasiliev, he talks about his Ars Electronica Golden Nica-winning project in the video below, and at bottom, you can watch an extensive technical demo. The idea: change news as people read it over networks. It’s both potential productive tool (fighting censorship) and cautionary tale (illustrating how malleable news is).

But the New Zealand-born, Berlin-based artist has also done more abstract, expressionist work, including modifying the Quake game engine to produce an audiovisual environment, or even to paint.