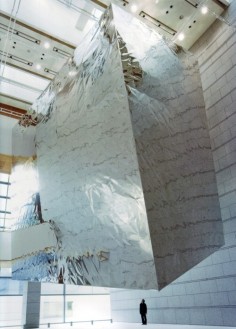 Junya Ishigami is a Japanese architect who studied architecture at the Tokyo National University of Fine Arts and Music. He has made his name with experimental installations and minimalist designs. For some of his work he uses his mathematical background as an architect and applies it to everyday objects like for example his table of 9,5m long and 2,6m wide. This doesn’t sound very impressive. The interesting part is that the table is made out of 3mm thick aluminum and is only supported by two legs on each side. This means that the table is as thick as a sheet of paper. Normally it would bend because of the weight of the material. To keep the table balanced it has been bend in the other direction. I found myself mesmerized by the simplicity of this piece. Also his 1 ton balloon is an amazing combination of architecture and art. This angular, helium-filled balloon was produced for atrium of the Museum of Contemporary Art in Tokyo.
.
.
.
.
.
.
.
source; jeanniejeannie

Japanese architect Junya Ishigami‘s Cuboid Balloon is a marvelously enormous balloon made out of aluminum that weighs over a ton– and yes, it floats! Filled with 1000 m3 of helium, the five-story high parallelotope structure was completely free floating in the atrium of the Museum of Contemporary Art in Tokyo in 2008.

There’s not too many photos of the installation, but there’s a short youtube clip of a museum employee reaching out and gently pulling the balloon down towards the floor with one hand. It’s the perfect embodiment of so many paradoxes: a weightless mass, filling an empty space with air.